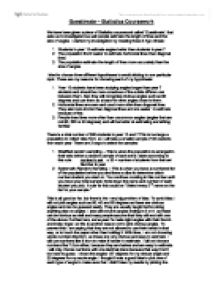 Guestimate - investigate how well people estimate the length of lines and the size of angles.

Guestimate - Statistics Coursework We have been given a piece of Statistics coursework called 'Guestimate', that asks us to investigate how well people estimate the length of lines and the size of angles. I started my investigation by creating these 3 hypothesis: 1. Students in year 10 estimate angles better than students in year 7. 2. The population find it easier to estimate horizontal lines than diagonal lines. 3. The population estimate the length of lines more accurately than the size of angles. I tried to choose three different hypotheses to avoid sticking to one particular topic. These are my reasons for choosing each of my hypothesis: 1. Year 10 students have been studying angles longer than year 7 students and should be more conscious of the subtle differences between them. Also they will recognise obvious angles such as 90 degrees and use them as a base for other angles close to them. 2. Horizontal lines are seen and used more often than diagonal lines. They also look shorter than diagonal lines and are easier to estimate because of this. 3. People draw lines more often than uncommon angles (angles that are not 90, 360 or 45 degrees) and will be better at estimating something familiar. There is a total number of 360 students in year 10 and 7.This is too large a population to collect data from, so I will take a smaller sample of 30 students from each year. There are 2 ways to select the samples: 1. Stratified random sampling - This is when the population is arranged in their sets before a random sample of each set is taken according to this rule: number in set x 30 = number of students from that set Number in year 2. Systematic Random Sampling - This is when you have a numbered list of the population before you and throw a dice to determine which number student you start on. ...read more.

This proves my first hypothesis, but it could be improved by having angle 2 come up with the same sort of analysing. Analysing Cumulative frequency Graph and Box Plot for Angle 2 The IQR was the same for both year 7 and year 10 for this graph, so we cannot comment on which year was better at estimating. We can, however, comment that the curve was a lot shorter for year 10 than it was for year 7. This could be because of an anomalous result in the year 7 estimates that caused the group to be more spread out. This is worse as the longer the curve; the further away from the actual answer the estimates were going. The highest and lowest values were the same for both box plots. This also helps prove my first hypothesis. Analysing Cumulative frequency Graph and Box Plot for Line 1 For this graph year 7 had a smaller IQR than year 10. This indicates that year 7 is better at estimating lines than year 10. However the median for year 10 is closer to the actual length than the median for year 7. This shows that year 10 although they have a more spread out range, they are better at estimating accurately. Analysing Cumulative frequency Graph and Box Plot for Line 2 As in the previous graph, year 10 have a larger IQR which shows that they are more inconsistent but they do have a median that is closer to the actual length than year 7. Improvements My second hypothesis could only be used if I used my own angles and lines. As you see, that was impossible, but if I was to do the investigation again I would like to be able to test whether the angle at which the line is positioned affects how people estimate. I would also take a bigger sample to get a wider range of estimates. This would help me be fairer in my next investigation. By Deborah Rosenthal Queen Elizabeth Girls School, Barnet ...read more.