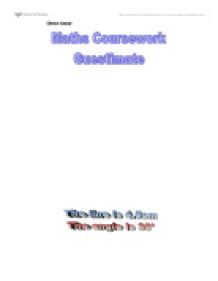 Guestimate - The line and the angle.

Hypothesis 1- I predict that if people are good at guessing the length of a line they will be good at guessing the degrees of an angle. 2- I predict that the higher the schooling year the better the estimate. Target population I have decided to investigate within the schooling ages of 7 and 9 firstly because these are easily available to collect due to having timetables and knowing where all the students will be when needed to guestimate. Another reason for picking students between these ages is that it is a big enough variety to draw conclusions from, and decide whether the amount of school really does improve the ability to guess the size of a line or angle. I will not be asking every year group as this will take up too much time and will not be necessary. I will be asking years 7, 9 and 11 this gives a big enough range of the amount of school experienced without asking every year. Study Population I have chosen to get a list of the students in years 7, 9 and 11 and then ask every fourth person on the list this will the give a quarter of each year being asked which is enough to draw conclusions from. I am not going to ask everyone in the three selected years because this would take to long and it is not compulsory to get the information I need. Aims I will prove my hypothesis true or false by asking the selected people to guess the length of a line or size of an angle and then find the mean median mode for each year and draw graphs. I will also draw a graph relating their guess of the size of an angle to their guess of the length of a line. To gain fairly accurate results we will not let the pupils take the sheets away whilst guessing we will stay with them so there is no chance of using a rule or protractor. ...read more.

The actual size of the angle was 38? so "The higher the set the better the estimate" this proves my hypothesis correct. I also investigated the modal group to see if most the estimates were made in the correct group. Set Modal group (line) Modal group (angle) 1 >4 - 6? >40 - 50? 3 >2 - 4? >40 - 50? 5 >4 - 6? >40 - 50? Set 1 and set 5 had the correct modal group but set 3 had the modal group too low. All the sets had the modal group for the angle too high as the correct answer would have been >30 - 40? this has no effect on my hypothesis. I investigated the median to see if it got closer to the correct number the higher the year. Set Median (line) Median (angle) 1 4.5 40 3 5.5 43 5 5 42 Set one median of the line was exactly correct this helps prove my hypothesis correct. Set 5 median of the line was closer to the actual than set 3 I have found that set 5 are better at estimating the line than set 3. Again set 1 was closer to the actual but then set 5 was second best with set three being the worst. I investigated the range to see if the estimates became any more consistent as the year got higher. Set Range (line) Range (angle) 1 6 40 3 8 70 5 8 80 The range was smallest for set one this proves that my hypothesis was correct because the estimates were more consistent. The range of the angle proves my hypothesis was correct, as it is smaller for set 3 than it is for set 5. The range of the line for set 3 and 5 are the same this does not prove that my hypothesis was correct or wrong. I found out that set 5 students were better at estimating the line than set 3 students other than that my hypothesis was correct. Chrissie Cassley ...read more.