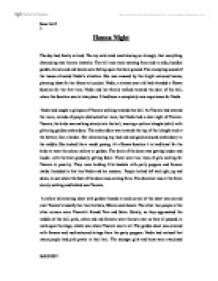 The day had finally arrived. The icy cold wind was blowing so strongly, that everything obstructing was thrown instantly. The tall trees were swaying from side to side, bundles golden, brown and red leaves were falling upon the bare ground. The crumpling sound of the leaves attracted Nadia’s attention. She was amazed by the bright coloured leaves, planning ideas for her future art project. Nadia, a sixteen year old had attended a Henna function for the first time. Nadia and her family walked towards the door of the hall, where the function was to take place. It had been a completely new experience for Nadia.

Nadia had caught a glimpse of Yasmin walking towards the hall. As Yasmin had entered the room, crowds of people obstructed her view, but Nadia had a clear sight of Yasmin. Yasmin, the bride was walking slowly into the hall, wearing a yellow lehngha (skirt) with glittering golden embroidery. The embroidery was towards the top of the lehngha and at the bottom like a border. Her shimmering top had red and gold coloured embroidery in the middle. She looked like a model posing. At a Henna function it is traditional for the bride to wear the colour yellow or golden.

Finally Yasmin was seated upon a double chair, comfortably. Everyone gathered round her. Her family took a seat on the near by chairs beside Yasmin. She was smiling and was full of joy. The sparkle in her eyes, told Nadia she was happy and excited about the occasion. Her eyes were glowing, like the colours of the sunset. All her clothes, shoes were matching, and looked stunning. Everything had gone according to plan, expressed Nadia’s friends. As it was an Asian wedding the occasions are held over a number of days, so everything had to be perfect. Her friends sorted out her lehngha before she sat down. Everyone then, took a seat, and one by one went up to speak to Yasmin. The yellow dazzling sheet with golden threads was removed from above Yasmin’s head. A number of flowers fell towards the floor of the hall, emitting a fresh rosy smell.

Yasmin’s family were also seated on the stage near Yasmin. There were balloons behind the stage, giving a colourful effect of the stage. To have balloons was Yasmin’s idea as she had seen them at a previous Henna Night and decided that she would prefer them rather than just having more banners.

Nillah and Nadia were providing people with the Henna tubes to use and also held a silver dish, with Asian sweets and fruits. The fruits and Asian sweets were given to the bride by the guests who were attending the Henna night. Mainly Yasmin chose to eat fruits as the Asian sweets were too sweet for her taste. Many people had given gifts, and household items such as, crockery. Nadia’s family had gifted her a new jewellery set. However, Yasmin’s parents had bought her a new car, but that was a surprise.

Towards the end of the function, there were dances in time with the Indian music playing. There were many dances performed by my cousins and Yasmin’s friends. Nadia did not dance, as she was not enthusiastic and did not consider herself as good as the others. The function was very lively and nearly everyone was there. Nadia in particular had enjoyed the function greatly and looked forward to the wedding. Once the function had ended, the photographers took final photos inside and outside in the hall gardens and when Yasmin left with her friends, everyone began to move, preparing to go home as the function had come to an end. Yasmin had left first as it is traditional for the bride to do so. It was the end of a long lively day, which Nadia will always remember.