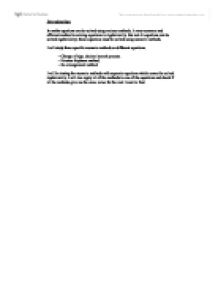 Introduction In maths equations can be solved using various methods. A very common and efficient method in solving equations is algebraically. But not all equations can be solved algebraically; these equations must be solved using numeric methods. I will study three specific numeric methods on different equations. ~ Change of sign, decimal search process. ~ Newton-Raphson method. ~ Re-arrangement method. I will be testing the numeric methods with separate equations which cannot be solved algebraically. I will also apply all of the methods to one of the equations and check if all the methods give me the same value for the root I want to find. Change of Sign, Decimal Search To find the root of the equation f(x) = 0 means finding values of x for the graph y = f(x). The change of sign method works on the bases that the y = f(x) graph changes signs when it crosses the x-axis. e.g. y = f(x) The sketch above shows that there is a root between the interval [b , c] and the curve of y = f(x) crosses the x-axis and changes its sign from negative ( - ) to positive ( + ), and at the interval [a , b] f(x) curve crosses the x-axis changing its sign from positive ( + ) ...read more.

Also if the initial value is selected close to a turning point then it will also cause the formula to either diverge or converge to another root. eg The selected initial value lies to close to the turning point of the f(x) curve, this creates the tangent from the initial value to diverge outside the area of the f(x) curve. This subsequently renders the method to fail as no further estimates of the root can be obtained. When trying to find the root between the interval [0 , 1] and using the initial value as 0.88. The tangent is forced to diverge from the f(x) curve, this illustrates the failure of the Newton-Raphson method. Newton-Raphson Method in Practise The equation to be used in finding a root using the Newton-Raphson method is, y = x?????????? Sketch of y = x?????????? Magnified view of tangent markings. Newton-Raphson formula calculations. Re-arrangement Method This method operates by re-arranging the initial equation, f(x) = 0 into the form of g(x) = x, this makes the values of x the root of the equation. This method also works using a fixed point estimation process. The sketch of y = g(x) and y = x are plotted on the same set of axes, where the y = x line crosses y = g(x), produces the root(s) ...read more.

The Newton-Raphson method only required two iterations before converging to the required root. The change of sign method had to go through six cycles before producing the required root correct to six decimal places. The re-arrangement method went through four iterations to produce the root value. Although the re-arrangement method only marginally lost in time efficiency when compared to the Newton-Raphson method; the re-arrangement method proves to be the most demanding. As the re-arrangement method relies on producing a re-arrangement to the form of y = g(x) and satisfies the fact y = g` (x) < y = x`. The change of sign, decimal search method is a very straight forward method which can be applied easier then the other methods, but lacks in its rate of convergence. So in an overall comparison I can state that the Newton-Raphson method has the fastest rate of convergence, and thus has an efficient process of finding the desired root of an equation that must be solved numerically. The use of software packages and hardware devices make understanding the methods and application of the methods faster and more accurate. Using Excel spreadsheet in displaying the calculations for the change of sign method proved to be efficient as it enabled repetitions of calculations to be performed much faster than by manual process. Also using graphical displaying software such as Autograph allowed easier demonstration of the process of the different methods, and a more accurate interpretation of the methods. ...read more.