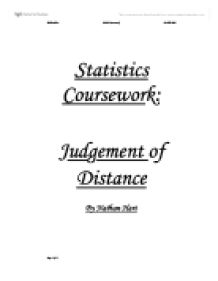 I have decided to investigate people’s judgement of measurements as the subject for my Statistics Coursework.

Before starting this experiment I needed to define guidelines that would establish the fairness of the tests method of assessment. The method I chose to fulfil this requirement was to:

* Denotes anomalous results which have been disregarded for the purposes of the graph, table totals and averages. This was thought a result of ‘seeing’ the target between tests with and without glasses on.

Data: Girls judgement compared with that of Boys

To test whether girls are better judges of distance than boys I will compare every fifth boy and girl results when using their favoured hand. Candidates must not be spectacle wearers, as we would then be introducing another variable. The data shown is the total score of the candidates three estimates using their preferred hand.

The data from table 5 has been grouped here into a second table 6. The reason for me doing this is so that I am able to then transfer the data in table 6, firstly into a frequency density graph, and then cumulative frequency graphs from table 7.

For this sample I predicted that handedness will have no effect on judgement of distance.

I made this prediction because the hands have nothing to do with a candidate’s judgement of distance, it is their eyes. As you can see from my results this apparently is the case.

The tests I applied examined:

Whilst the indications are all my predictions have been shown to be apparently correct, the degree of variability from individual results makes absolute conclusions difficult. In any extension of the work I would try and increase the size of the test population database. This would increase the confidence in the conclusions.