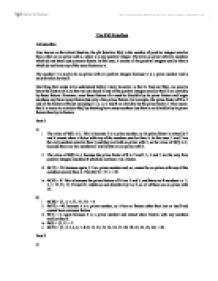 Investigation of the Phi Function

The number 1 is said to be co-prime with all positive integers because it is a prime number and is only divisible by itself.

Since, the tables above do not show any clear link or pattern between m and n, I have now made two tables comparing the values of m and n that do work for the equation Φ(mn) = Φ(m) x Φ(n) on the right, and the values that don’t on the left. Maybe this will help me spot a relationship between them.

At a first look, it seems that for all the values of m and n that do work, one number is even and the other odd. However, there are some exceptions, which show that this cannot be the case. For example, 1 and 3, 1 and 5, and 3 and 5 are all combinations of m and n which are both odd and yet they fulfil the equation Φ(mn) = Φ(m) x Φ(n).

In other words, m=, pk-1where m represents the number of multiples of p less than pk.

Another thing we need to know, is the rule we learnt from Part 3, that Φ(xy) = Φ(x) x Φ(y), when x and y are co-prime. Applying this rule to Φ(pnqm) through substitution, if we say that x = pn and y = qm, then Φ(pnqm) = Φ(pn) x Φ(qm). The rule works because, as I explained earlier, the prime factors of pn and qm will be p and q respectively because they are both prime numbers, and so pn and qm will always be co-prime too, because they cannot have any common factors.

So we now know how to find Φ(pn) for any prime value of p by using the formula Φ(pn) = pn - pn-1 or Φ(qm) for any value of q using Φ(qm) = qm – qm-1. In this case, we must understand that n and m are used as constants instead of k, and that the meaning is one and the same. Using this information and the knowledge that Φ(pnqm) = Φ(pn) x Φ(qm), we can then find out Φ(pnqm) for any prime values of p and q.