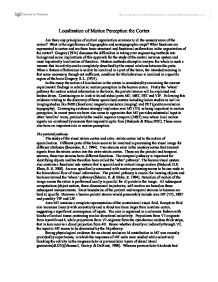 Localization of Motion Perception the Cortex

Localization of Motion Perception the Cortex

Are there any principles of cortical organization common to all the sensory areas of the cortex?  What is the significance of topographic and nontopographic maps? What functions are represented in cortex and are there basic structural and functional uniformities in the organization of the cortex?  Gregory (1974) discusses the difficulties in taking over engineering methods into biology and some implications of this approach for the study of the central nervous system and most importantly localization of function.  Modern methods attempt to analyze the whole in such a manner that its activity can be completely described by the causal relations between the parts.  When a feature of behaviour is said to be localized in a part of the brain, the intended meaning is that some necessary, though not sufficient, condition for this behaviour is localized in a specific region of the brain Gregory, R.L. (1974).

In this essay the notion of localisation in the cortex is considered by examining the current experimental findings in relation to motion perception in the human cortex.  Firstly the ‘where’ pathway for motion related information in the brain, the parietal stream will be explained and broken down.  Continuing on to look at its individual parts MT, MST, FST and VIP.  Following this evidence relating to the discovery of these specialised centres including lesion studies as well as imaging studies like fMRI (functional magnetic resolution imaging) and PET (positron emission topography).  Converging evidence strongly implicates area MT (V5) as being important in motion perception.

MST has a crude topographical organization, with cells that have large receptive fields including the fovea.  Most are strongly direction selective, and they respond best to large moving stimuli.  In addition over 90% of MST neurons were found to be sensitive to the disparity of the visual stimulus( i.e. how unique or uncommon it is).  Some neurons respond strongly to rotating or isotropically expanding of contracting patterns of motion, as well as frontal parallel planar motion, and their response is invariant with respect to the size shape or contrast of the pattern.  Such neurons might contribute to the analysis of the large optic flow stimulation generated as an observer moves through the visual environment (Logothetis 1994).

Area FST has no retinotopical organization. Receptive field size is large, usually including the fovea.  About 32% of the cells in FST show directional selectivity mainly responding to complex object motion.

Area VIP, a projection zone described by Maunsell and Van Essen(1983), contains neurons with response properties very similar to those reported for area MT. In fact about 80% of VIP neurons respond at least twice and on average nine times as well to stimulus movement in the preferred direction as compared to stimulus movement tin the non-preferred direction.  Many neurons in VIP are tuned to speed.

The primate cortex began to replace the cat as the primary object of study and the discovery of functional specialization in extra-striate visual cortex, including the motion area MT (V5) was a major advance.  Area MT (V5) in monkeys is anatomically and physiologically distinctive and has been studied in length and great detail.

This student written piece of work is one of many that can be found in our AS and A Level Mechanics section.

Related AS and A Level Mechanics essays