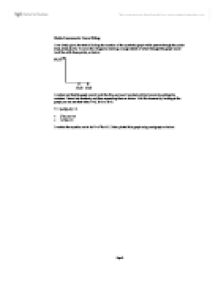 I was firstly given the task of finding the equation of the quadratic graph which passes through the points (5,0), (3,0), (0,15). To solve this I began by drawing a rough sketch of what I thought the graph would look like with these points, as below:

I worked out that the graph would look like this, and next I worked out the formula by putting the numbers I knew into brackets, and then expanding them as below. I did this because by looking at the graph you can see that when Y=0, X=5 or X=3.

I worked the equation out to be Y=x2-8x+15. I then plotted this graph using omnigraph as below:

I then put the numbers into brackets again (as below), because I worked out that when Y=0, X=3, and no other number. Then once again expanded the brackets to find the formula:

I worked out the formula to be:

I could be sure that this was the correct equation because the co-ordinate was (0,9) which shows that the graph passes through +9, and the above equation proves this.

I decided to find the equation of the graph which passes through the points (-1,10), (2,-2), (5,4) before I worked out a method. I started by sketching what I thought the graph would look like. I also realised that the equation for all graphs is:

I then put the details I knew from the graph into three separate equations. I then labelled them a, b and c.