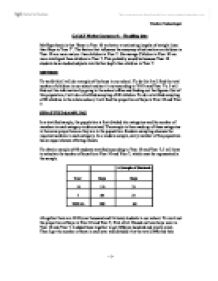 To verify this I will do a sample of the boys in our school. To do this I will find the total number of children in our school and sort it out according to Y10’s and Year 7’s. I will find out this information by going to the school office and finding out the figures. Out of this population, I will do a stratified sampling of 60 children. To do a stratified sampling of 60 children in the whole school, I will find the proportion of boys in Year 10 and Year 7.

Altogether there are 1013 (one thousand and thirteen) students in our school. To work out the proportion of boys in Year 10 and Year 7, First of all I found out how boys were in Year 10 and Year 7. I added these together to get 199(one hundred and ninety-nine). Then I got the number of boys in each year and divided it by the total (199) and then multiplied it by 60(sixty). I rounded this answer to a whole number. This is because it would be an easier number to work with and you cannot round people to decimal places or significant figures.

Survey must be done during school hours so that most of the subjects are in a similar frame of mind.

No items of measurement should be nearby, so that the subject has nothing to compare the line/angle to.

60 people must take part in the survey

All participants must be asked whether they are able to see the diagrams clearly.

The student may not communicate with anyone else who is able to view the paper or who has done the survey.

I performed my pilot study and I found out that my survey was done to a good standard was understandable and got to the point. The boys I tested it on commented that it was set out well and did not need altering. One thing they all asked me was, “Did I get it Right” or “How much was I off by”. This made me think for a while and in the end I concluded that I should a ‘Deviation’ and a ‘Percentage Error’ column in my results table.