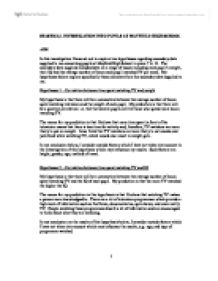 In my conclusion below, I consider outside factors which I have not taken into account in the investigation of this hypothesis which may influence my results.  Such factors are: height, gender, age, method of travel.

In this way I produced my stratified sample of 50 pupils which I have set out at Appendix 1.  The number column in appendix is the number of the pupil in that year and gender group, assigned through the random number generation process.

It must be remembered that these results have been drawn from a sample only.  More conclusive results are likely to be obtained from a larger collection of data than the 50 in my sample.

I am surprised by my finding of a negative correlation in the TV v Weight comparison.  Possible explanations for such a correlation, if it is genuine (ignoring factors such as dirty data and limited sample), may include the fact that there is a lot of sport on television and it is possible that the more athletic pupils watch it.

However, my investigations into both hypotheses were limited and always unlikely to have proved a link between the two pieces of data in each case, and even less likely, a direct causal relation.  For instance, I did not take into account external factors which could have affected or improved my results.

External factors which I could have taken into account to improve both my investigations include factors like age, height, gender, method of travel to school and programmes watched.  Most of these factors were available to me in data form on the secondary data supplied to me.  I would have to have done further primary investigation (through e.g. questionnaires) into a breakdown of types of programme watched, if I wanted to discover further possible explanations for any correlations found.  A more conclusive investigation is likely to result if this additional material is used and taken into account, which may support a direct causal relationship.