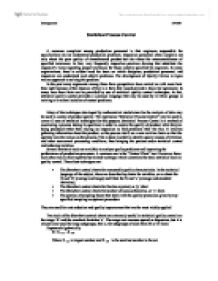 A common complaint among production personnel is that engineers responsible for specifications do not understand production problems. Inspection personnel often complain not only about the poor quality of manufactured product but also about the unreasonableness of specified tolerances. In fact, very frequently inspection practices develop that substitute the inspector′s views regarding proper tolerances for those actually specified by engineers. In many organizations, there is evident need for basic on which designers, production personnel, and inspectors can understand each other’s problems. The development of Quality Circles in Japan was an approach to solving this problem.

They are used for cost reduction and quality improvement that are the most widely applied.

Two tools of the Shewhart controls charts are extremely useful in statistical quality control are the range ‘R’ and the standard deviation ‘s’. The range tool measure spread or dispersion, but it is almost never used for large subgroups, that is, for subgroups of more than 20 or 25 items.

Where X max is largest number and X min   is the smallest number in the set.

The standard deviation of the set of numbers from their arithmetic mean is designated by ‘s’.

The calculation of Shewhart control-chart limits for variables data is the normal or gaussian distribution. The expressed algebraically for this distribution is :

A plot of this function over its full range -∝ to +∝ produces the familiar symmetrical bell-shaped curve. It is a continuous curve over its fully range and has a mean value of zero and a standard deviation of one.

Although control charts and statistical types of acceptance sampling procedures were originally developed for use in mass production manufacturing, these techniques are applicable to most other types of activities in all sectors of the economy including service business, government, education, and health care.