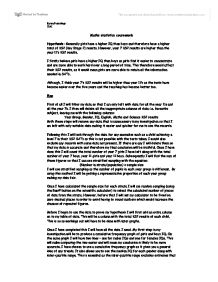 Hypothesis: Generally girls have a higher IQ than boys and therefore have a higher total of KS2 (Key Stage 2) results. However, year 7 KS2 results are higher than the year 11’s KS2 results.

I firstly believe girls have a higher IQ than boys as girls find it easier to concentrate and are more able to work hard over a long period of time. This therefore would affect their KS2 results, as it would mean girls are more able to retain all the information needed in SATs.

Although, I think year 7’s KS2 results will be higher than year 11’s as the tests have become easier over the five years and the teaching has become better too.

First of all I will filter my data so that I am only left with data for all the year 11s and all the year 7s. I then will delete all the inappropriate columns of data i.e. favourite subject, leaving me with the following columns:

Both these steps will remove any data that is unnecessary in my investigation so that I am left with only suitable data making it easier and quicker for me to use the records.

Following this I will look through the data for any anomalies such as a child achieving a level 7 in their KS2 SATs as this is not possible with the tests taken. I would also exclude any records with some data not present. If there are any I will delete them so that my data is accurate and therefore my final conclusion will be truthful.

My second cumulative frequency graph for year 11 showed me the bottom 50% of girls in year 11 scored higher IQs than the bottom 50% of boys. However, this is reversed with the top 50% as here the boys appear to achieve higher IQs. The box and whisker diagrams then demonstrate that both genders have very close medians but the boys have a much larger overall and inter-quartile range than the girls. This is then supported by the stem and leaf diagram as the girls data is in a much narrower band with no real extremes like with the boys data.

Following this the scatter diagrams all demonstrate that IQ is related to KS2 results as there is a positive correlation. This suggests the higher the IQ the higher the total of KS2 results and visa versa. Subsequently the cumulative frequency graph after this shows that girls in year 7 have higher KS2 results than boys in the same year.

In my final step the cumulative frequency graph shows me year 7s scored higher KS2 results than year 11s. However, it also shows a few year 11s scored higher than the highest scoring year 7. Finally the last box and whisker diagrams highlight that the year 11s results were more spread out than year 7s.