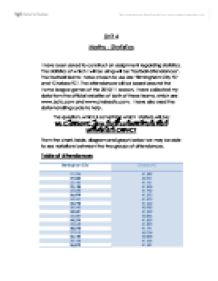 Statistics. I have been asked to construct an assignment regarding statistics. The statistics of which I will be using will be football attendances. The football teams I have chosen to use are Birmingham City FC and Chelsea FC.

I have been asked to construct an assignment regarding statistics. The statistics of which I will be using will be ‘football attendances’. The football teams I have chosen to use are ‘Birmingham City FC’ and ‘Chelsea FC’. The attendances will be based around the Home league games of the 2010/11 season. I have collected my data from the official websites of both of these teams, which are www.bcfc.com and www.chelseafc.com.  I have also used the data-handling cycle to help.

The question, which is something which I stated, will be:
Do Chelsea FC have more consistent fans than Birmingham City FC?

From the chart, table, diagram and graph below we may be able to see variations between the two groups of attendances.

As you can see above, there is a variation between the two groups of attendances, although it is too early to tell I feel Chelsea appear to have a higher consistency of attendances. 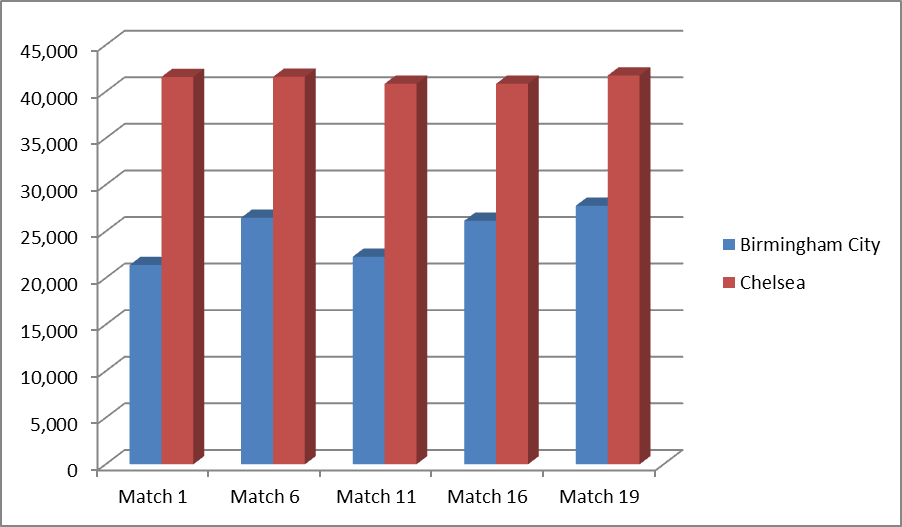 The frequency table shows that Birmingham City attendance goes into 2 groups, whereas Chelsea FC shows their data into just 1 group.

So it appears from all of the diagrams, table etc. above, Chelsea FC have more consistent fans, judging by Birmingham City variation, which would therefore mean they are less consistent to reach the same number of attendance each week.

Finding the Mean, Median and Mode

In order to find the Mean, I will add all of the attendance numbers together, and divide the number of sets of data I recorded;

Both gradients are positive and steep rising. So from the results above this would mean that there is less of a difference between the Chelsea attendances that the Birmingham attendances. Birmingham’s interquartile range is far higher than that of Chelsea, meaning Chelsea’s attendance is more consistent. 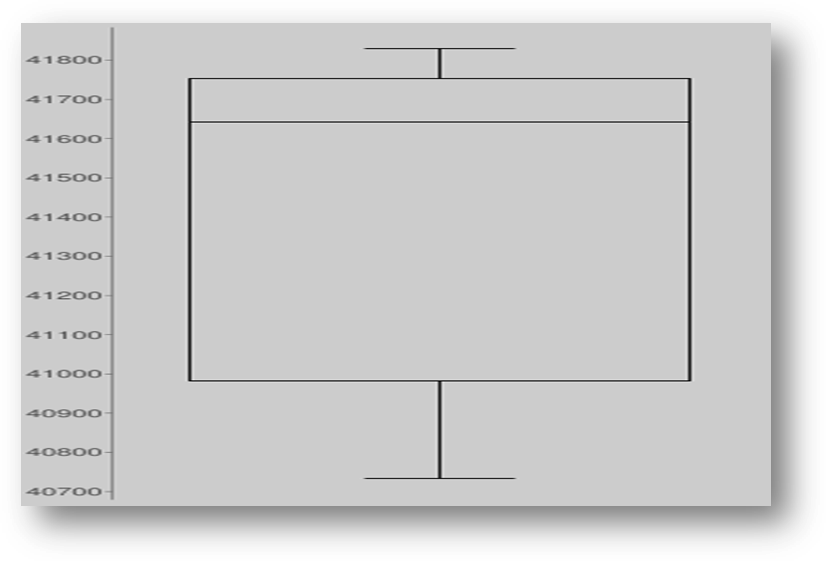 This spread shows a lower spread of data, meaning the data is less varied and more consistent. This box plot shows that it is a Negative skew, meaning there are more higher values than lower values.

From all of the research and in depth analysis of both Birmingham City and Chelsea attendances, it has been proven that Chelsea have the more consistent attendance in the home league matches of the 2010/2011 season, this does not mean they were more consistent throughout any other seasons, just the season that was examined. I feel I have effectively gathered relevant data and concluded it with relevant proof regarding the consistency of the attendances.