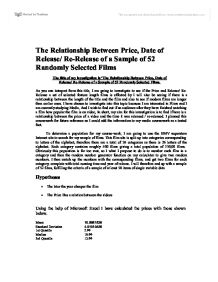 The Relationship Between Price, Date of Release/ Re-Release of a Sample of 52 Randomly Selected Films

Mean = 10.59 10.59 + 2(4.92) = 15.51 10.59 - 2(4.92) = 5.67 Therefore about 95% of my data should lie in the range of. About 49 values should be in this range. About 49 values are in this range Conclusion The quality of the investigation could be improved by using a more varied population; in an ideal world this would be an Internet site of every film ever made. As this does not exist, the site that contains the most comprehensive list of films will have to do. Which in this case is the site that I used, the HMV superstore site. My method of collection would not vary even if I used another site. If I used three randomly picked numbers for each category, then I would end up with a sample of 78 films, which I think is too much to produce an accurate report on. I think that this investigation was a success, as it helped me to gain some information that will help me in another topic, and because it was completed as accurately as I could. ...read more.