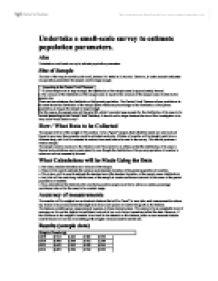 According to the Central Limit Theorem:

n If the sample size is large enough, the distribution of the sample mean is approximately Normal.

For this reason, the sample size will be set at 50, which I consider large enough for the distribution of its mean to be normal (according to the Central Limit Theorem). It should not be larger because the aim of this investigation is to carry out a “small scale survey”

How / What Data to be Collected

The sample will be of the weight of 50 smarties. To be a “good” sample, that is that the results are valid and not biased in any way, these smarties must be collected randomly.

Estimate of the Variance of the Population of Smarties

This figure can then be used to estimate the variance of the parent population.

Estimate of the Mean of the Parent Population

The standard error calculated above is quite small. This means that the variance of the sample mean is low, and this shows that one can be quite confident that the actual mean of the population is around 0.976. However this is not a very “mathematical” or “user friendly” method of showing how confident one is about the accuracy of the estimate made.

The sample might have been a “fluke” I might have got all the big smarties, or all the small ones. However there is not much to do to eliminate the possibility of this apart from to weigh every single smartie. This is extremely impractical (possibly impossible).

The smarties gathered were from my immediate area. Even though they were taken from different shops and different packets, they do not necessarily represent all the smarties in the world, only ones in my area.

The results may be unreliable because the company that produces smarties may be changing, or have changed the mean weight setting for the smarties. They may be trying to slowly lower the weight while keeping the price the same. This could mean that the actual population parameters are somewhat different to the ones estimated here.

A statistical analysis of entire tubes of smarties could be carried out. The actual weight of the smarties could be compared to the price on the tube to determine whether the manufacturers are lying about how much smartie there is in their packets.

Weighing smarties of different colours could also be done to find if there are any differences between them.

Also, a larger sample size could be taken to determine the mean and variance more accurately