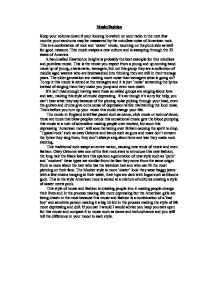 A band called Hawthorne heights is probably the best example for this mindless and pointless music. This is the music you expect from a young and up coming band made up of young

Music/Fashion Keep your volume down if your looking to switch on your radio in the next few months your eardrums may be massacred by the mindless noise of American rock. This is a combination of rock and `skater' music, touching on the punk side as well for good measure. This music swipes a new culture and is sweeping through the 52 states of America. A band called Hawthorne heights is probably the best example for this mindless and pointless music. This is the music you expect from a young and up coming band made up of young, charismatic, teenagers, but not this group they are a collection of middle aged wasters who are brainwashed into thinking they are still in their teenage years. ...read more.

Think before you turn up your music this could change your life. The music in England is all fast paced such as dance, club music or techno/trance, these are tunes that blow peoples minds this sensational music gets the blood pumping this music is a rush of adrenaline making people over excited, but soon this depressing `American rock' will soon be taking over Britain causing the spirit to drop. `Typical rock' such as ozzy Osborne and bands such as guns and roses don't scream the lyrics they sing them, they don't always sing about love and war they make rock exciting. This traditional rock swept an entire nation, causing new tends of music and even fashion. ...read more.

This is the style American rock is aimed at a mixture of cultures creating a style of skater meets punk. This style of music and fashion is drawing people into it making people change their lives and in the process making life more depressing but the American girls are being drawn in the most because this music and fashion is a combination of a `bad boy' and sensitive person making it a big hit but in the process making the style of life more depressing and dull. If you can I would I would advise you keep you ears open for this music and compare it to music such as dance and techno/trance and you will tell the difference in your mood to each style. ...read more.