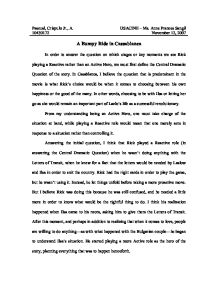 A Bumpy Ride in Cassablanca

Pascual, Crispulo Jr., A. USACINE - Ms. Anne Frances Sangil 10430172 November 12, 2007 A Bumpy Ride in Cassablanca In order to answer the question on which stages or key moments we see Rick playing a Reactive rather than an Active Hero, we must first define the Central Dramatic Question of the story. In Casablanca, I believe the question that is predominant in the movie is what Rick's choice would be when it comes to choosing between his own happiness or the good of the many. In other words, choosing to be with Ilsa or letting her go as she would remain an important part of Lazlo's life as a successful revolutionary. From my understanding being an Active Hero, one must take charge of the situation at hand, while playing a Reactive role would mean that one merely acts in response to a situation rather than controlling it. ...read more.

He started playing a more Active role as the hero of the story, planning everything that was to happen henceforth. As for the relation to the Journey's Stages, I have to admit that it is quite hard to pinpoint which moment in the movie is which stage of the journey. Should the journey include the flashbacks? If so, Rick's "Ordinary World" would be the world outside Casablanca. If the journey starts with the beginning of the movie, then Rick's "Ordinary World" would be the setting before he meets Ilsa again. As to have a little bit of clarity with this confusion, I tried to start from the end: I think the "Return with the Elixir" would be Rick returning to his "normal life." Although I didn't get what he and Captain Renault was talking about in the end, if they were to live as revolutionaries, or they would stay in Casablanca to live their lives as when the movie started. ...read more.

Having said that, I don't think there was any other Hero who took control of the situation during the stages prior to that. The circumstances simply played while our hero sat back and watched. Moving on, what was revealed about Rick with these events is that he likes to decide when things have already played out, as evident in his line "the less time to think the easier for all of us." Although I think he already knew what to do at this point, the line says so much about him. He likes to watch before he makes his final choice. In sum, I think the movie was a challenge in understanding the Journey's Stages. The story line posed as an obstacle for pinpointing the exact stage in which a certain scene of the movie could be related to. Nonetheless, in my opinion, this would only make the movie more interesting and would further my appreciation for the movie's complex plot, which was impressively squeezed in a short amount of time! ...read more.