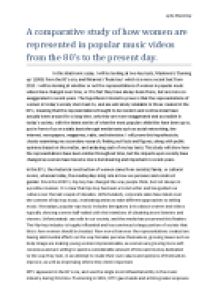 A comparative study of how women are represented in popular music videos from the 80s to the present day.

﻿Lydia Mawdsley A comparative study of how women are represented in popular music videos from the 80?s to the present day. ________________ In this diachronic essay, I will be looking at two key texts, Madonna?s ?Burning up? (1983) from the 80?s era, and Rihanna?s ?Rude boy? which is a more recent text from 2010. I will be looking at whether or not the representations of women in popular music videos have changed over time, or if in fact they have always been there, but are more so exaggerated in recent years. The hypothesis I intend to prove is that the representations of women in today?s society stem back to, and are extremely relatable to those created in the 80?s, meaning that the representations thought to be modern and controversial have actually been around for a long time, only they are more exaggerated and accessible in today?s society, with the latest stories of what the most popular celebrities have been up to, put in front of us on a daily basis through media texts such as social networking, the internet, newspapers, magazines, radio, and television. I will prove this hypothesis by closely examining my secondary research, finding out facts and figures, along with public opinions based on the matter, and analysing each of my key texts. This study will show how the representations have been similar throughout time, but the impacts upon society have changed as women have become more domineering and important in recent years. ...read more.

Music videos became more essential for the promotion of a recording, it became an entertainment product. The growing pop culture truly defined the era of the 80?s. Madonna was a feminist and fashion icon, as well as a s*x symbol of the 80?s and her music videos brought up a lot of discussion. I am going to focus on her video ?Burning Up? which was released in 1983; I will be exploring conventions, stereotypes, points, ideas and representations. The first thing I noticed upon viewing this video was how the song portrayed Madonna in classic submissive female positions such as her head rolling forwards, her arms held up above her head, on her knees and bending her back. However, I also noticed that by the end of the video, she is showing power, status and control when she is driving the car rather than the man, showing how "Burning Up" was a beginning of Madonna's depiction of her taking control of the male sexuality. During the story of the video, Madonna is shown to be wearing a white dress as she sings the song proclaiming her helpless passion for her lover. This colour of the dress (white) connotes purity, innocence and virginity, the colour is also often associated with goodness and cleanliness. The audience take this as a symbol of her love for the man. ...read more.

Therefore, the media, including internet sites such as Facebook influence their choices in order of them achieving there social goals. Recent years have also brought an uprising in the media, relating mainly to the way Women are represented in Music videos. As a female, we are constantly being taught to stand up for ourselves, and that we are just as important as men. However, it seems that female artists creating music videos lower themselves in terms of how they dress, appear, act, and the lyrics they sing. I think this is mainly due to the need to attract attention, gain viewers, listeners and fans. Also, if a female artist dresses provocatively in a video, they know it will cause controversy in the media, therefore giving themselves free advertisement and publication. Rihanna intro: MTV think Rihanna is this generations Madonna. Video analysis: Theory: Her love for the boy portrayed her as a helpless victim like the stereotyped female portrayed in many silent movies. At one point in the video Madonna is shown being hit by a car driven by a young man, played by Compton.[18] By the end of the song Madonna is shown driving the car, with a knowing, defiant smile on her lips and has ditched the man, thereby giving the message that she was in charge, a theme recurrent throughout her career.[18] ...read more.