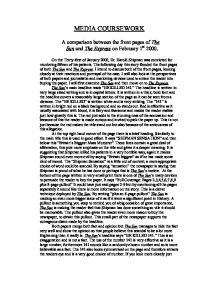 A comparison between the front pages of The Sun and The Express on February 1st 2000.

MEDIA COURSEWORK A comparison between the front pages of The Sun and The Express on February 1st 2000. On the Thirty-first of January 2000, Dr. Harold Shipman was convicted for murdering fifteen of his patients. The following day this story flooded the front pages of both The Sun and The Express. I intend to discuss both of the front pages, looking closely at their reactions and portrayal of the case. I will also look at the perspectives of both papers and journalistic and marketing devices used to entice the reader into buying the paper. I will first examine The Sun and then move on to The Express. The Sun's main headline reads "HE KILLED 141." The headline is written in very large sized writing and is in capital letters. It is written in a thick, bold font and the headline covers a reasonably large section of the page so it can be seen from a distance. The "HE KILLED" is written white and is very striking. The "141" is written in bright red on a black background and so stands out. Red is effective as it usually associated with blood, it is fiery and fearsome and makes the reader realize just how ghastly this is. The red just adds to the stunning ness of the accusation and because of this the reader is made curious and invited to pick the paper up. This is not just because the red makes the title stand out but also because of the seriousness of this allegation. At the top right hand corner of the page there is a brief heading. Similarly to the main title this is used in good effect. It says "SHIPMAN SENSATION" and then below this "Britain's Biggest Mass Murderer" These lines contain a great deal of alliteration, this puts more emphasis on the title and gives it a deeper meaning. It is suggesting that Shipman killed his patients in a very horrible way, again it makes Shipman sound even more evil by saying "Britain biggest" as if he has made some kind of record. ...read more.

The layout of the page is simple, yet it is effective in holding the readers attention. If looked at in a landscape view it can be seen that The Sun's front page is laid out in thirds. The first third contains the "HE KILLED" the second third contains the photograph that focuses on Shipman's eyes and the final third contains the 141 in red colour. Around this layout is a black border. Having the photograph in between the headline is effective, because Shipman appears as though he is trapped and is angry with the reader because of this. The Sun's front page has very little amount of writing on it and limits the amount of the story being told to the reader. It tells you that he killed 141 but does not go into that much further, because the reader is kept in suspense he or she wants to find out more and buy the paper. The variation in size of the words is used to brilliant effect, The Sun gets across exactly what it wants to the reader, by putting the facts in small print and the opinions in large. The use of photography is also very effective, The Sun portrays Shipman as evil and it makes the situation sound a lot more dramatic. The Express on the other hand takes a slightly different viewpoint from The Sun. It uses a different technique and is more open-minded in it's approach. The Express contains a lot more writing than The Sun but still leaves the reader wanting to know more, it does this through its main title which says "SHIPMAN: DID HE MURDER 1,500?" It is written in a normal serif font, the writing is narrowly spaced out and not as thick as the writing used in The Sun's headline. As with The Sun the headline is in capitals, this is primarily because of the importance of the words. ...read more.

Its approach gives Dr. Shipman a chance and does not make accusations, it appears more neutral but when looked at closely its implications make Dr. Shipman look more guilty than he is. The layout is not as nearly as effective as The Sun's, I think this is because The Sun differentiates from the photograph to the headline. The Express contains a lot more writing and does not use colour, this makes it look a lot less eye catching as compared with The Sun. In conclusion both the newspapers are successful in grasping the readers attention and eventually selling copies. Both papers but especially The Sun have taken advantage of the story and made it into something enormous. The story itself is very good for a newspaper because it is different to your everyday story, not all the facts are known The Sun and The Express both varied in the amount of people killed by Dr. Shipman. It is interesting to see the techniques used and to see how manipulative the newspapers are in wanting to sell more copies. Both The Sun and The Express make good use of headlines, opinions that sound like facts and photographs to portray Shipman as evil, the papers do dramatise the story to an extent and make it more interesting to read. Both papers come in with different viewpoints, The Sun makes its objective clear by accusing Shipman saying he killed 141, The Sun is very clever in the way it hides facts and turns opinions into facts. The Express on the other hand appears to be neutral giving Shipman a chance, it is very clever with its accusations and hides then subtly. Overall its wording is more sophisticated even though initially it seems dull. I prefer The Sun as it is more eye catching, colourful and vibrant, it also contains an eight page pullout. So if I were to buy one of these papers I would buy The Sun simply because it is more eye catching and very striking. It stands out from the rest and is very noticeable from a far distance. By Muhammad Versi ...read more.