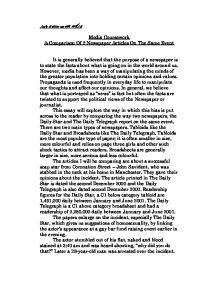 A Comparison Of 2 Newspaper Articles On The Same Event

Rafe Butterworth 11KLB Media Coursework A Comparison Of 2 Newspaper Articles On The Same Event It is generally believed that the purpose of a newspaper is to state the facts about what is going on in the world around us. However, media has been a way of manipulating the minds of the greater population into holding certain opinions and values. Propaganda is used frequently in everyday life to manipulate our thoughts and affect our opinions. In general, we believe that what is portrayed as "news" is fact but often the facts are twisted to support the political views of the Newspaper or journalist. This essay will explore the way in which this bias is put across to the reader by comparing the way two newspapers, the Daily Star and The Daily Telegraph report on the same event. There are two main types of newspapers. Tabloids like the Daily Star and Broadsheets like The Daily Telegraph. ...read more.

The headline is ambiguous and draws attention to it. It is written in very bold and uncomplicated text. It reads "STABBED FRED WAS HALF INCH FROM DEATH" It is quite obviously trying to grip the reader to read on. This tabloid interpretation of events uses simple English language because it has to be understood by a lower class person. You don't need to have a large attention span to read it. The first page gives a broad outline of the article. Then the reader has to turn to page 4 where events are dramatised and enlarged. However there are more paragraphs, shorter in length so as not to put off the reader. The subheading e.g. "gruelling", "blanket" and "dicey" could aid the readers understanding. The Daily Star has interviewed different people, from one of the neighbours, to his family and fellow actors whereas The Daily Telegraph has interviewed nobody. ...read more.

The sentences tend to be longer and the whole tone of the article is serious and informative. In my opinion the photograph used by the Daly Telegraph has much more of an impact on the reader than those used by the Daily Star. This isn't just because of its size but the content conveys the visual message of the actor leaving hospital, aided by a nurse and showing his dressing on his neck. The smaller picture on the front page of the Daily Star shows John Savident from the chest up baring his dressing. It just does not have the same impact as it is swallowed up by the text. The picture of him on page 4 in his Morgan sports car is completely irrelevant to the incident. The other picture of the police officer stood guard outside his flat is just boring. I much prefer the Daily Telegraph pr�cis of events because it is more to the point. The expansion and irrelevance of the article written in the Daily Star doesn't encapsulate the reader in the same way. Rafe Butterworth 11KLB ...read more.