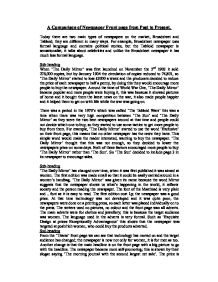 A Comparison of Newspaper Front page from Past to Present.

A Comparison of Newspaper Front page from Past to Present. Today there are two main types of newspapers on the market, Broadsheet and Tabloid; they are different in many ways. For example, Broadsheet newspaper uses formal language and contains political stories, but the Tabloid newspaper is sensationalist, it talks about celebrities and unlike the Broadsheet newspaper it has much less formal language. Sub-heading When 'The Daily Mirror' was first launched on November the 2nd 1903 it sold 276,000 copies, but by January 1904 the circulation of copies reduced to 74,801, so 'The Daily Mirror' started to loss �3000 a week and the producers decided to reduce the price of each newspaper to half a penny, by doing this they would encourage more people to buy the newspaper. Around the time of World War One, 'The Daily Mirror' became popular and more people were buying it, this was because it showed pictures of home and it bought them the latest news on the war, it also made people happier and it helped them to get on with life while the war was going on. There was a period in the 1970's which was called 'The Tabloid Wars' this was a time when there was very high competition between 'The Sun' and 'The Daily Mirror' as they were the two best newspapers around at that time and people could not decide which one to buy, so they started to use some tactics to get more people to buy from them. ...read more.

At the bottom below the picture there is a two column simplified articles of the event, this gives information as to what happened. The text is dramatic, powerful, emotive, but formal language is used. In the text the word 'wireless' is used, this shows that they had a radio, which is important, because they had means of communication, but the Titanic still sunk. Sub-heading More recent tabloids have advanced and changed from the past tabloids. One change I noticed was that 'The Daily Mirror' has become the 'Welsh Daily Mirror', which has a sense of identity because the 'Welsh Daily Mirror' appeals to people in Wales. Its Masthead is in a different font compared to the past 'Daily Mirror', it is bolder and it is less formal. I also noticed that this Masthead is set out in a more modern way. The key word in the Masthead is 'Mirror' the 'M' of the 'Mirror' is in very large font, but the other letters are in smaller font and the rest of the Masthead 'Welsh Daily' which is on top of the word 'Mirror' is in even smaller font. Also the newspapers price has gone up to 32p, but 32p is still cheap and all the people in all the classes A-E would be able to afford it. ...read more.

This is done to attract buyers, because there is a lot of competition between newspapers. It's a human-interest story, which is extremely emotional. Under the picture of the helmet a phrase describing what the picture is 'POIGNANT: A helmet from the shuttle lies on the ground yesterday', Poignant means painfully sharp, deeply moving, arousing sympathy. The rest of the phrase is emotional and attracts an audience. If we look at the first edition of 'The Daily Mirror' and at one of the latest editions we can straight away see that there is a big difference between them. The price has changed from 1p to 32p, the target audience changed from the newspaper being just for women to both males and females. Also as technology has advanced it has had a big influence on newspapers in many ways. The newspaper layout, colour, pictures and even websites have been set up for many newspapers giving them a wider range of audience. These days' tabloids seem to have articles on celebrities, fashion, sport and weather. Many newspapers also contain adverts. By doing my research at home, I found a 'Daily Mirror' newspaper on its 100th birthday and this newspaper contained an article showing 100 front pages of their newspaper from their 1st edition to one of their latest editions, showing us a gradual change in the front-page layout. ...read more.