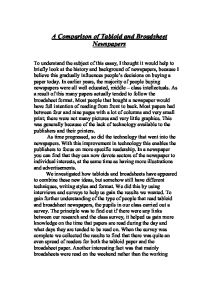 A Comparison of Tabloid and Broadsheet Newspapers

A Comparison of Tabloid and Broadsheet Newspapers To understand the subject of this essay, I thought it would help to briefly look at the history and background of newspapers, because I believe this gradually influences people's decisions on buying a paper today. In earlier years, the majority of people buying newspapers were all well educated, middle - class intellectuals. As a result of this many papers actually tended to follow the broadsheet format. Most people that bought a newspaper would have full intention of reading from front to back. Most papers had between four and nine pages with a lot of columns and very small print; there were not many pictures and very little graphics. This was generally because of the lack of technology available to the publishers and their printers. As time progressed, so did the technology that went into the newspapers. With this improvement in technology this enables the publishers to focus on more specific readership. In a newspaper you can find that they can now devote sectors of the newspaper to individual interests, at the same time as having more illustrations and advertisements. We investigated how tabloids and broadsheets have appeared to combine these new ideas, but somehow still have different techniques, writing styles and format. We did this by using interviews and surveys to help us gain the results we wanted. ...read more.

I enjoy reading 'The Sun' as it contains a lot of sport news and celebrity news. Tabloid papers in my opinion are a lot easier to read as u don't have to take a lot of time reading each article like you do in the broadsheet newspapers. Before we actually started to examine individual articles, we made some general assertions concerning the papers contents. We all noticed that there were a surprisingly large amount of adverts in the broadsheet newspaper, which included a completely covered double-page spread on just adverts. A "British Airways" advert, covered a page of the "Daily Telegraph" the size made it eye-catching and very effective to the reader. For further exploration we compared two articles, which at the time were concerning the situation in Saudi Arabia. The first article was featured in "The Sun", entitled, "Saudi Aid". The second article was found in "The Daily Telegraph" entitled, "Arab states back Bush over Iraq". My immediate observation was the difference and contrast in headlines. The tabloid headline was much shorter than that of the broadsheet, therefore the information given was. "Saudi Aid" gave the reader a suggestion of the articles content, but did not make any kind of effort to enhance on the subject. On the other hand "The Telegraph" was more informative and had a much more detailed headline, "Arab states back Bush over Iraq". ...read more.

The picture was of Jack Straw and by adding a picture the information in the article is authentic and may entice the reader to look more closely at the piece, and maybe value the reporter's opinion more. Another creative effect is "The Suns" use of italics. By placing a chosen phrase or paragraph in italics, the reader's attention is drawn to the chosen area, showing that the specific phrase is important, and so the reader should pay attention to it. The general tone of " the suns" article is informal throughout the piece. The reporter remains biased and doesn't believe that the possibility of war may be resolved. The piece in "The Telegraph" takes an objective style and presents both sides of the argument, and continually stating that there is no definite war. The miscellany in reporting styles also includes the use of more formal language with words such as 'repercussions'. I would presume that the readers of a broadsheet newspaper are more middle-class. This is a generalisation but that the fact that there is more business, finance and culture in the broadsheet newspaper. There is one similarity between the articles it is that they both include the national security adviser "Conddeezza Rice". Overall the broadsheet newspaper includes more concept language and is rather informal, whilst the tabloid newspaper has short headlines with a catchy theme to it, instead of a more sophisticated and simple headlines brought to us by the broadsheet newspapers. ...read more.