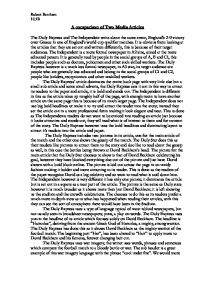 A comparison of Two Media Articles.

A comparison of Two Media Articles The Daily Express and The Independent write about the same event, England's 2-0 victory over Greece in one of England's world cup qualifier matches. It is obvious from looking at the articles that they are set out and written differently, this is because of their target audiences. The Independent is a more formal newspaper in A2 size, aimed at the more educated person. It is generally read by people in the social groups of A, B and C1, this includes people such as doctors, policemen and other such skilled workers. The Daily Express however is a much less formal newspaper, in A3 size, its target audience are people who are generally less educated and belong in the social groups of C1 and C2, people like builders, receptionists and other unskilled workers. The Daily Express' article dominates the entire back page with very little else but a small sub article and some small adverts, the Daily Express sets it out in this way to attract its readers to the paper and article, it is bold and stands out. The Independent is different in this as the article takes up roughly half of the page, with enough room to have another article on the same page this is because of its much larger page. ...read more.

The picture is the same as Daily stars however it is much broader as it shows more than just David Beckham; it is left showing us the stadium and the crowd's celebrations. The chooses to do this as its readers prefer a much more in depth view as to what has happened when reading their articles, with this they can see the sort of atmosphere there would have been in the Stadium. The Daily Express uses a type of language typical of most tabloid newspapers, but not usually seen in broadsheet newspapers; puns, a play on words. The Daily Express uses pun in the headline of its article which focuses solely on David Beckham. The headline is "Haircules", deriving from the ancient Greek God of Hercules, a mighty, strong warrior. The Daily Express has done this as it shows David Beckham as the mighty warrior of the football match. The beginning part "Her", has been altered to "Hair" to apply more to David Beckham and his famous, forever changing hair cut. The Daily Express uses war imagery; the writer uses words, phrases and sentences which compare the football match to a b****y battle or war. ...read more.

The Independent inputs phrases such as "the importance of maintaining our discipline", so that the comments appear more intellectual and appeal more to its readers. The Daily Express however writes this comment as "It was important we kept our discipline", keeping the phrase more simple, so that it's less sophisticated readers are not put off by complex language. The independent also contains much more dialogue than the Daily Express, this is because the Independent would like to get across as many view points as possible on the match, so that it's readers can think for themselves and come to their own decision on the what kind of match the game was. In conclusion both of the articles are effective for their different readers. The Daily Express writes more basically and writes more about gossip and facts to appeal to its lesser educated readers. With bold headlines and the picture of David Beckham the paper is going to sell as it attracts its readers. The Independent is very different, it is much more factual, it's more educated readers are less interested in the gossip and would rather read the facts. The article contains a lot of dialogue and refrains from using war imagery, presenting different view points enabling the reader to make their own decision on the match. Robert Bentham 10.1B ...read more.