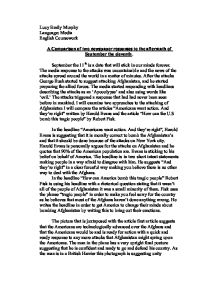 A Comparison of two newspaper responses to the aftermath of September the eleventh.

Lucy Emily Murphy Language: Media English Coursework A Comparison of two newspaper responses to the aftermath of September the eleventh. September the 11th is a date that will stick in our minds forever. The media response to the attacks was uncontainable and the news of the attacks spread around the world in a matter of minutes. After the attacks George Bush started to suggest attacking Afghanistan, and he started preparing the allied forces. The media started responding with headlines describing the attacks as an 'Apocolypse' and also using words like 'evil.' The attacks triggered a response that had had never been seen before in mankind. I will examine two approaches to the attacking of Afghanistan I will compare the articles "Americans want action. And they're right" written by Harold Evans and the article "How can the U.S bomb this tragic people" by Robert Fisk. In the headline "Americans want action. And they're right", Harold Evans is suggesting that it is morally correct to bomb the Afghanistan's and that it should be done because of the attacks on New York city. ...read more.

In the picture that is juxtaposed with the headline "How can the U.S bomb this tragic people" there is a sense of war and suffering in everyday life. This photograph suggests that if America did attack, the country would have no means of protection. The photograph is set with two young children climbing on an old army tank, this is suggesting that the apparatus of war have become absorbed into the landscape and has become part of every day life. In the area surrounding the photograph the land is decaying and is destroyed the country is not technologically advanced and that it would not take a lot for America to destroy the entire country. They certainly would not put up a strong competition for the Americans. In both headlines there are two conflicting views as to what to do about Afghanistan. They are both confident and sure as to what they ought to do. For example the headline "and they're right" suggests that he believes that only his view is correct. ...read more.

lot it is also an offensive term that you would remember because the only way to say the phrase 'Demented fanatics' is in a harsh tone of voice. Many people would argue for bombing Afghanistan and many would argue against. There are a lot of conflicting views as to what should be done about either bombing Afghanistan or not. Harold Evans and Robert Fisk have written down their conflicting beliefs trying to get the country to believe what they do, and they have come to their own decisions. I have concluded that the headlines on these particular articles show what the writer believes at the beginning of the article with clear self-explanatory headlines. I have also explained the use of language written down in order to explain clearly what both the writers believe. My comparison of the two articles proves that not only people agreed with the bombing of Afghanistan they also thought it was the morally correct thing to do, however there were a few minority of people that thought it was wrong to bomb a country with such a poor defence mechanism as Afghanistan. ...read more.