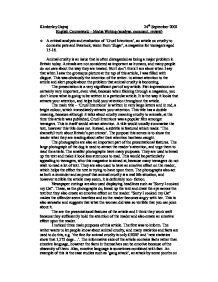 A critical analysis and evaluation of 'Cruel Intentions', an article on cruelty to domestic pets and livestock, taken from 'Sugar', a magazine for teenagers aged 15-18.

Kimberley Gajraj 24th September 2002 English Coursework - Media Writing (analyse, comment, review) * A critical analysis and evaluation of 'Cruel Intentions', an article on cruelty to domestic pets and livestock, taken from 'Sugar', a magazine for teenagers aged 15-18. Animal cruelty is an issue that is often disregarded as being a major problem in Britain today. Animals are not considered as important as humans, and many people do not care about the way they are treated. But I don't think I am alone when I say that when I saw the grotesque picture at the top of this article, I was filled with disgust. This was obviously the intention of the writer- to attract attention to the article and alert people about the problem that animal cruelty is becoming. The presentation is a very significant part of any article. Fist impressions are certainly very important, even vital, because when flicking through a magazine, you don't know what is going to be written in a particular article. It is the way it looks that attracts your attention, and helps hold your attention throughout the article. ...read more.

This is also sarcastic and suggests that what the woman did was so terrible that you can joke about it. The are the presentational features of the article and I think they work well because they sufficiently hold the attention of the reader and also create an emotive effect upon the reader. I noticed three main purposes of this article. The first was to inform. The writer wants to let people know about animal cruelty, and many statistics and facts are used to do this, e.g. 'the fine for animal cruelty is only �5000' and 'new statistics show that 1,175 dogs...'. The informative side of the article contains facts rather than emotive language, however the facts in themselves can be emotive because of the obscenity of them. Also, emotive language is sometimes combined with fact. An example of this is the case studies such as 'gang attack', an attack by some youths on a piglet. These portray the facts but they also use many emotive adjectives such as 'savagely' and petrified'. I think this is one of the most effective parts of the article Kimberley Gajraj because it combines emotive facts and language. ...read more.

It does not become clear at first that persuasion is an aspect of the article, but in the last paragraph titled 'What can you do?' it becomes clear that the main purpose of the article is to persuade. Of course the writer wanted to inform and interest the reader, but the reason for the writer wanting to do this is to persuade the reader to do something about animal cruelty. After having an emotive effect on the reader, the writer starts to put pressure on the reader to take action against animal cruelty. This is done using three-fold repetition such as 'can, can, can' and using reputable organisations such as the RSPCA and the NCDL to show the intensity of the problem. A lot of pressure is put on the reader and it is debateable whether or not this is a good thing- sometimes people can feel insecure under a lot of pressure. However, in this case I think it is effective, because I don't think teenagers would be worried about such pressure. Overall, I think this is a very effective article, combining literary and presentational techniques to create an emotive effect on and interest the reader, to inform the reader, and to persuade the reader to take action against animal cruelty. ...read more.