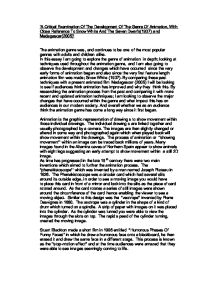 'A Critical Examination Of The Development Of The Genre Of Animation, With Close Reference To Snow White And The Seven Dwarfs(1937) And Madagascar(2005)'

'A Critical Examination Of The Development Of The Genre Of Animation, With Close Reference To Snow White And The Seven Dwarfs(1937) and Madagascar(2005)' The animation genre was, and continues to be one of the most popular genres with adults and children alike. In this essay I am going to explore the genre of animation in depth; looking at techniques used throughout the animation genre, and I am also going to observe the development and changes which have occurred since the very early forms of animation began and also since the very first feature length animation film was made; Snow White (1937). By comparing these past techniques with a present animated film Madagascar (2005) I will be looking to see if audiences think animation has improved and why they think this. By researching the animation process from the past and comparing it with more recent and updated animation techniques; I am looking to observe the major changes that have occurred within the genre and what impact this has on audiences in our modern society. And overall whether we as an audience think the animation genre has come a long way since it first began. Animation is the graphic representation of drawings to show movement within those individual drawings. The individual drawings are linked together and usually photographed by a camera. The images are then slightly changed or altered in some way and photographed again which when played back will show movement within the drawings. The process of animation or ''showing movement'' within an image can be traced back millions of years. Many images found in the Altamira caves of Northern Spain appear to show animals with eight legs suggesting an early attempt to show movement within a still 2D image. ...read more.

This technique was also used on other characters in the film, such as Prince Charming. The models movements were traced directly off of the cameras. The traced images were given to animators and used as a rough guide in creating the finished animated characters. This is a far cry from techniques used for animated characters today, in films such as Harry Potter (2001) and The films in the Lord Of The Rings trilogy. (2001) Other early Disney animations which used similar techniques to Snow White include; Bambi (1942), 101 Dalmatians (1961) and ), Fox and the hound (1981) The simple technology used to create Snow White as far as today's standards are concerned isn't as advanced as the animation techniques we are used to in films such as Shrek (Disney, Pixar 2001) and Monsters Inc (2002) in which we as an audience are able to experience things such as textures within the animated characters, such as the immaculate detailing of the fur on the character Sully's body. However when Snow White was created it was a far cry from the early animations in black and white and without sound. The story of Snow White follows the basic principles of the Russian structuralist Vladimir Propp. Propp studied fairy tales and he documented that within these stories there where a number of different types of characters that all appeared. Some of these characters Propp identified include; the hero (Prince Charming), The Villain (Wicked Step-mother), The 'Donor' who brings a magical property to the story (7 Dwarfs), The Princess (Snow White). Snow White, for its time contains many ideologies that we are still able to associate with today. ...read more.

As we can see from techniques used in ''Madagascar'' animation has come a long way since the days of tracing off a camera to create lifelike characters. This role of the classic animator who would draw a large number of sketches by hand to create a simple movement has been replaced by computers which are not only able to create a simple movement but create actual layers of the human form from skeleton to skin, in order to create an immaculate perception of the human or animal form. Has animation improved? Or has it just transformed into a higher standard? Animated films of this century are extremely popular as were animated films of the past. This shows that it's not so much the actual improvement of animation techniques, but more so the need to keep up with current times and expectations of society today. In our modern society, audiences want more than what has been on offer in the past. Audiences want more action, more humour and more realism in what they are viewing. People's expectations in relation to the animation genre have grown. With new advances in technology, audiences want to be able to relate to animated characters on screen as if they were real. This is becoming more of a reality with films such as Shrek, where the character Princess Fiona is so human like its almost impossible to recognise that she is in fact an animation; a vision of an animation artist come to life. People still view all the older animated films, which show they haven't lost their appeal even though they may not be as advanced and sophisticated as the animated films we see today. Animation as we know it today began with a visionary named Walt Disney, but will it ever end? Only time will tell if animation's popularity will grow or diminish. ...read more.