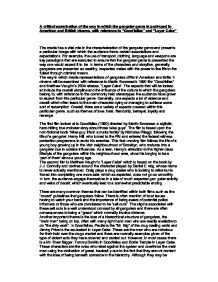 A critical examination of the way in which the gangster genre is portrayed in American and British cinema, with reference to &quot;Goodfellas&quot; and &quot;Layer Cake&quot;

A critical examination of the way in which the gangster genre is portrayed in American and British cinema, with reference to "Goodfellas" and "Layer Cake" The media has a vital role in the characterization of the gangster genre and presents a particular image with which the audience forms certain associations and expectations. For example, the use of transport, clothing, language and weapons are key paradigms that are executed to ensure that the gangster genre is presented the way one would expect it to be. In terms of the characters and storyline, generally gangsters are presented as wealthy, respected males with the power to live life to the fullest through criminal means. The way in which media representations of gangsters differ in American and British cinema will be examined with reference to Martin Scorcese's 1990 film "Goodfellas" and Matthew Vaughn's 2004 release, "Layer Cake". The aspects that will be looked at include the overall storyline and the influence of the culture to which the gangsters belong to, with reference to the commonly held stereotypes the audience have grown to expect from this particular genre. Generally, one expects a lot of violence and deceit which often leads to the main character dying or managing to achieve some sort of redemption. Overall, there are a variety of aspects covered within this particular genre, such as themes of love, hate, friendship, betrayal, loyalty and revenge. The first film looked at is Goodfellas (1990) directed by Martin Scorcese, a stylistic, hard-hitting true mobster story about three 'wise guys'. ...read more.

This is due to the fact that poor immigrant families in pursuit of a better life normally fall prey to crime and that to some is seen as a type of justification for their actions. In British made gangster films however, the characters are typically English, cockney even, and there is an underlying sense of humor with which the audience can relate to. The dress sense used in both films show another key difference in the portrayal of American gangsters to the British. Scorcese managed to interpret the image of the mafia into the film by emphasizing their 'over the top' dress sense of sharp suits which are almost metallic looking, with bowler hats and shoes shined brightly. This creates the personalities of the gangsters in Brooklyn and over all New York. Their presence is known by their sense of style. The more suave and sophisticated they look, the better the respect they receive and their status as a well known 'wise guy' increases. In Layer Cake the dress sense seems to appear more laid back. The British may also take pride in their appearance as strong men in the 'underground business' but compared to the culture portrayed by Scorcese in the life of Henry Hill, Vaughn's characters appear more down to earth, less identifiable and overall, less "flashier" than those in Goodfellas. Audiences over the years have also managed to identify Italian American gangsters with their dress sense in films, stereotyping them with the iconography that has become considerably familiar to film viewers. ...read more.

The media have created a more threatening look for the mafia whereas a man of the same power in an English film could be presented just the same as an unsuspected English pub landlord. Although physically appearances and the overall attitudes may differ, the principles of being a gangster remain the same and it is also important to note the time zone in which these films were set. Gangsters presented in the era of Goodfella's were recognised in their own individual way at that time so comparing their portrayal to a contemporary gangster like Craig's character in Layer Cake is bound to vary. The societies may be set on the same foundations but the way in which a gangster could have acted between 1950 and 1970 is evidently different from today's world in which the law enforcement agencies are considerably more "clued up" on the illegal trade markets and therefore more of a risk to those engaging in criminal activity. The gangster genre has been around for many years now and there are a multitude of similarities between films of this category. It is due to the media's provision of imagery that audience members are able to identify gangsters and understand how they are supposed to act and regardless of the cultural setting, the ideas remain the same to the point where one can almost predict what will potentially happen and when. Although film makers are able to keep the audience on their toes and add compelling twists to their storylines it does not alter the fact that, like most other genres, the main themes become easily identifiable and therefore contain an element of predictability. ...read more.