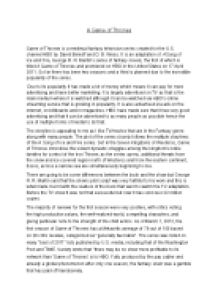 A Game Of Thrones Case Study

﻿A Game of Thrones Game of Thrones is a medieval fantasy television series created for the U.S. channel HBO by David Benioff and D. B. Weiss. It is an adaptation of A Song of Ice and Fire, George R. R. Martin's series of fantasy novels, the first of which is titled A Game of Thrones and premiered on HBO in the United States on 17 April 2011. So far there has been two seasons and a third is planned due to the incredible popularity of the series. Due to its popularity it has made a lot of money which means it can pay for more advertising and have better marketing. ...read more.

The storyline is appealing to me as I like TV/movies that are in the Fantasy genre along with many people. The plot of the series closely follows the multiple storylines of the A Song of Ice and Fire series. Set in the Seven Kingdoms of Westeros, Game of Thrones chronicles the violent dynastic struggles among the kingdom's noble families for control of the Iron Throne; as the series opens, additional threats from the snow and ice covered region north of Westeros and from the eastern continent, Essos, across a narrow sea are simultaneously beginning to rise. ...read more.

The majority of reviews for the first season were very positive, with critics noting the high production values, the well-realized world, compelling characters, and giving particular note to the strength of the child actors. As of March 7, 2012, the first season of Game of Thrones has a Metacritic average of 79 out of 100 based on 28 critic reviews, categorized as "generally favorable". The series was listed on many "best of 2011" lists published by U.S. media, including that of the Washington Post and TIME. Variety wrote that "there may be no show more profitable to its network than 'Game of Thrones' is to HBO. Fully produced by the pay cabler and already a global phenomenon after only one season, the fantasy skein was a gamble that has paid off handsomely. ...read more.