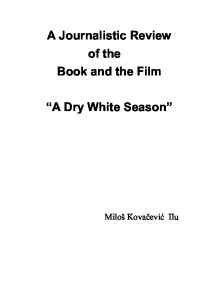 A Journalistic Review of the Book and the Film &quot;A Dry White Season&quot;.

A Journalistic Review of the Book and the Film "A Dry White Season" Milo� Kovacevic IIu Shooting. Screams. Blood. Dead bodies lying on the road. The fight of the blacks for their civil rights was very hard indeed. South African system was in crisis. Thousands of blacks were murdered, mutilated and imprisoned. Apartheid propaganda is strong. Of course, the government denies all responsibility for terrorizing blacks. Bad excuses are given for all murders. Suicides, natural causes of deaths. Not an unusual picture in black townships in South Africa during 70's. Situation was critical. On the other hand, life in parts of the country populated by Whites is almost untouched. An ordinary white family does not want to know about all the injustices done to the Blacks. They believe the apartheid system is good... Andr� Brink's book "A Dry White Season" is about the ordinary man fighting the Apartheid system in South Africa during those dangerous years. It is about his dilemma between responsibilities to the Afrikaans society and to justice. ...read more.

Now we shall discuss the main differences and similarities. The central figure, Ben, has put at the stake everything he had. As he says in the book:"Once in the lifetime, just once, one should have faith in something and risk everything for it". He considers fighting for the truth to be his moral obligation. He is very naive, he even talks with Stoltz, still wanting to believe that all the injustices are just a mistake. In the book, he is much more calm and patient. He had a discussion with Stanley who was drunk and entered his house where the whole family had lunch, while in the movie he even had a fight with him. In the film, he slapped the principle of the school after his son was expelled from the school. Also, he was threatening to Stoltz only in the film. In the book, Ben has two daughters and a son while in the movie he has only one daughter and one son. ...read more.

The story is told as if Ben was writing the book (in the first person) accept the beginning and the end, which are told by Andr� Brink (the third person). The book has too many long, pointless descriptions, for example the description of the Melanie's room. This makes the story too slow. Characters are two-dimensional. The story is very simplified, it is black and white. In the movie, this is corrected, but not enough. The movie has the advantage that we do not know what will happen until the end. On the other hand, we know Ben's destiny from the beginning of the book. The book is written retroactively. The camera is bad, and the acting could be much better even though the movie has good casting. Both the book and the movie tell us a lot about situation of the Blacks during apartheid in South Africa. They are also presenting how propaganda can make people believe in lies. They describe what happens to most of the people who opened their eyes and tried to help. They tell us a lot about the history of South Africa, many historical facts. This is their main quality. ...read more.