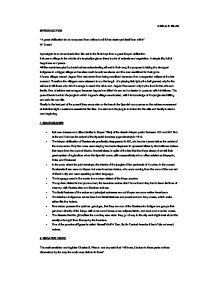 A great civilization is not conquered from without until it has destroyed itself from within discuss in respect to 'Apocalypto'.

CARLA E. ISLAS INTRODUCCTION " A great civilization is not conquered from without until it has destroyed itself from within" W. Durant Apocalypto is an adventure/action film set in the final days from a great Mayan civilization. It shows a village in the middle of a tropical jungle so there is a lot of animals and vegetation. A simple life, full of happiness and peace. All this was interrupted by brutal raiders exterminating all met in their way, the purpose to taking the strongest indigenes to a bigger village so females could be sold as slaves and the men sacrificed for their gods. A brave villager named Jaguar Paw was saved from being sacrificed because of an unexpected eclipse at the last moment. Therefore the villagers were released to run the length of a playing field (play the ball games) only for the raiders to kill those who didn't manage to reach the other end. Jaguar Paw saved only by the love for his wife and family. One of raiders was enraged because Jaguar had killed his son so he started to pursued with his fellows. The pursuit leads back to the jungle in which Jaguar's village was located, with his knowledge of the jungle start killing and safe his own life. Finally in the last part of the pursuit they encounter on the beach the Spanish conquerors so the raiders amazement at their first sight o seaborne ressels let him flee. He returns to the jungle to looked for his wife and family to start a new beginning. 1. INACCURACIES - It shows dresses and cities (similar to Mayan Tikal) ...read more.

When I listen to those who did the movie and see the scenes of so ambitious movie, I have the idea of that I seal the relation (persons) - object (movie), which product (interpreter) is the final result of such a connection, that is to say, the triad of Pierce, since simply I do not find such a links. It follows that, Farhad Safinia, for example, does the one who is one of the writers of APOCALYPTO speak about the jaguar ...? The academician that was in charge as a consultant Dr Richard Hansen, he is a specialist in Mayan archaeology of the zone of Guatemala, which makes me think that this it was the motive for which Tikal's pyramid used instead of that of Chichen-Itz�. I have many doubts: there is a moment in which Jaguar Paw is astonished of seeing the Spanish. Had not be eliminated the Mayan empire when the conquerors arrived? Is not the sea of the pyramids very far in this zone? (Especially at Tikal?). Did eclipse surprise the Maya? Were not they astronomers? Were sacrifices done by dozen? Kukulkan was walking thereabouts marauding? Was not he a god as Quetzalc�atl? In relation with the space and the time of the film, these did not fit to spaces and real times of the action, that is to say, the mistakes are of contained more than of form: the moon fills after the eclipse (the eclipses happen in new moon); the unpredictability of the eclipse: for others yes, but not for the Mayan astronomers; the topic of the distances: coasts - zones Maya; the lack of correspondence of the principal pyramid with supposed of Chichen-Itz�; the arrival of the Spanish after the fall of the Mayan empire. ...read more.

Rudy Youngblood, enormously expressive and communicator in the protagonist's role to which always we follow to the endless adventure. And for other one, Raoul Trujillo, actor with an impressive physical aspect, capable to comunicate much more with a look than with words. Words, certainly, spoken in Maya with a fluency from the part of all the actors, amazing, so much that this detail puts us more squarely in the context of the movie. I want here to say that it has seemed to me a good idea that the gentleman Mel has refused in roundly to double the film, such as it did in his previous film, lucky custom that starts spreading, so Clint Eastwood has the same wise decision with his film " Letters from Iwo Jima". As the movie speaks to us about the pure and hard emotions in the good sense of the word, also it throws out our more shameless faults, as the need, absurd and imperious need of destroy us one to others, to conquering , to killing for survive. By the way, to mention only and exclusively the scene previous to the ending of the film, logical way of ending a movie of these characteristics, with a scene that leaves us thinking, pondering. A magisterial way of turning a concrete fact into a universal history. Definitively, a magnificent film, which is growing in the memory as the days are passing, and that maybe with the time reaches the qualification of a masterpiece, which it is very closely to be. Go to see it without prejudices of any type, and leave you to drag for an endless number of sensations, thanks to the enormous power of Mel as an absolutely creator, that instinctively has realized a wonderful movie. 4. PARODIA*** ...read more.