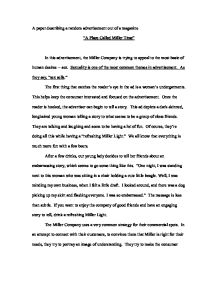 A paper describing a random advertisement out of a magazine &quot;A Place Called Miller Time&quot;.

A paper describing a random advertisement out of a magazine "A Place Called Miller Time" In this advertisement, the Miller Company is trying to appeal to the most basic of human desires -- s*x. Sexuality is one of the most common themes in advertisement. As they say, "s*x sells." The first thing that catches the reader's eye in the ad is a woman's undergarments. This helps keep the consumer interested and focused on the advertisement. Once the reader is hooked, the advertiser can begin to tell a story. This ad depicts a dark-skinned, longhaired young woman telling a story to what seems to be a group of close friends. They are talking and laughing and seem to be having a lot of fun. ...read more.

In an attempt to connect with their customers, to convince them that Miller is right for their needs, they try to portray an image of understanding. They try to make the consumer think that "this company knows what I go through. They can relate and understand me." By doing this, Miller gains the sympathy of their audience. These tactics are very common among companies that sell alcohol. Another common strategy for advertisers is to have incredibly attractive people trying to sell the product. If the consumer uses the product, he or she will join the fantasy portrayed in the advertisement. Average-looking people are featured only when they are directly related to the product they are selling. To be believable, an ad for acne medicine, must show someone who has suffered from the condition. ...read more.

The idea of fun and pleasure is applicable to almost everyone. In the Miller advertisement, they seem to be focusing more on people in their 20's, but that doesn't mean they're not trying to reach out to other audiences as well. Adults, college students, even teenagers will find something appealing in the ad. Ironically, the advertiser tries to insert a moral component in the Miller ad. In small little letters, we are admonished to "live responsibly." Most likely, this is a response to some sort of regulation, because these days it seems all alcoholic beverages have some sort of safety message to get across. Have fun, they say, but don't be stupid about it. When looking at advertisements, one must always to try to be careful not to be sucked in by the fantasy. It is the consumer's responsibility to analyze the details of the advertisement and guard against manipulation. ...read more.