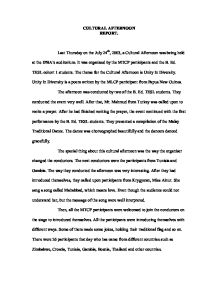 A report on the Cultural Afternoon held at the IPBA's auditorium. It was organised by the MTCP participants.

CULTURAL AFTERNOON REPORT. Last Thursday on the July 24th, 2003, a Cultural Afternoon was being held at the IPBA's auditorium. It was organised by the MTCP participants and the B. Ed. TESL cohort 1 students. The theme for the Cultural Afternoon is Unity In Diversity. Unity In Diversity is a poem written by the MLCP participant from Papua New Guinea. The afternoon was conducted by two of the B. Ed. TESL students. They conducted the event very well. After that, Mr. Mahmud from Turkey was called upon to recite a prayer. After he had finished reciting the prayer, the event continued with the first performance by the B. Ed. TESL students. They presented a compilation of the Malay Traditional Dance. ...read more.

After that, Mr. Bernard from Bosnia presented his performance by singing a song using his own language. Followed by named and Ameir from Bosnia. They showed and explained about a poster of the Bosnian Movie, which had won oscars award 2000/2. The movie title is 'No Man's Land' has won the award for Best Foreign Language. After that, they sang a Bosnian folk song. After changing conductors once again, B. Ed. TESL students performed their Kung Fu performances. After the Kung Fu show, a participant from Turkey sang a wonderful song. The audiences gave her big claps because she had sang the song well even without the background music. All the audiences had paid full attention on the stage to see the traditional costumes show from the other countries. ...read more.

Their performance is quite useful for us. After that, the Cambodian participants danced as soon as their song was played. Next performance was from Gambia. He sang his national anthem. The audiences rose up to show respect. The most waiting performance was Para-para Sakura Dance. The B. ED. TESL students performed this dance. They danced gracefully with many astonishing steps. The dancers were very energetic and noisily merry with their red and pink costumes. All the audiences felt refresh after watching this energetic dance. Lastly, before the Cultural Afternoon ended, the participant from Papua New Guinea recited her poem entitled 'Unity In Diversity'. She very well wrote the poem. The event ended as soon as the conductors declared it was closed. INTERNATIONAL LANGUAGES TEACHER TRAINING INSTITUTE SOCIAL STUDIES Lecturer: PUAN ROZANNA NORAINI bt. ALBAKRI Department of: ENGLISH LANGUAGE Student's name: WAN MUHAIMIN b. WAN AHMAD Identity Card's number: 851129-03-5681 Class: F1.4 (2003) Course: FOUNDATION B. Ed. TESL Cohort 2 ...read more.