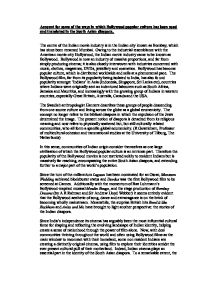 Account for some of the ways in which Bollywood popular culture has been used and translated in the South Asian diaspora. The centre of the Indian movie industry is in the Indian city known as Bombay, which has since been renamed Mumbai. Owing to the industrial resemblance with the American movie city Hollywood, the Indian movie industry came to be known as Bollywood. Bollywood is now an industry of massive proportions, and far from simply producing cinema; it is also closely interwoven with industries concerned with music, clothes, magazines, DVDs, jewellery and cosmetics. Bollywood has become popular culture, which is distributed worldwide and sells at a phenomenal pace. The Bollywood film, far from its popularity being isolated to India, has also found popularity amongst 'Indians' in Asia (Indonesia, Singapore, Sri Lanka etc), countries where Indians were originally sent as indentured labourers such as South Africa, Jamaica and Mauritius, and increasingly with the growing group of Indians in western countries, especially Great Britain, Australia, Canada and the USA. The Swedish anthropologist Hannerz describes these groups of people descending from one source culture and living across the globe as a global ecumenicity. The concept no longer refers to the biblical diaspora in which the expulsion of the Jews determined the image. The present notion of diaspora is detached from its religious meaning and now refers to physically scattered but, but still culturally related communities, who all form a specific global ecumenicity. (R Gowricharn, Professor of multicultural cohesion and transnational studies at the University of Tilburg, The Netherlands) ...read more.

Without letting these films fall into the Bollywood mould, the wedding gives the plausible and realistic opportunity for music and dance. It is presumed that a typical western audience would struggle through a Bollywood masala movie, finding the spontaneous dance sequences, frequent costume changes and 'happily ever after endings somewhat unrealistic. The crossover films of the South Asian diaspora allow the viewer to enjoy these elements, but in a more modern, toned down presentation. They make reference to classical forms of Bollywood filmmaking, whilst simultaneously differing completely. This cinema is a true reflection of the diaspora itself, the films presenting an amalgamation of old and new, the traditional and the modern, creating a new and individual identity of their own making. Therefore, where the most popular theme in masala movies is that of forbidden love, crossover films try to seem to approach issues more relevant to the diaspora. Highlighted subjects range from molestation and escort services to culture shock and arranged marriages. It would appear that these filmmakers manage to take subjects that have long been considered taboo, and present them in a fresh a realistic manner, accessible and acceptable to South Asian diaspora and western audiences alike. What all these films have in common is an irrepressible zest and energy. Like Bend in like Beckham, whose narrative is driven by the distinct bhangra sounds of Bally Sagoo's hybrid music, they are less an indication of a Bollywood influence than an encompassing tribute to the life affirming tradition of Indian music and entertainment. ...read more.

The west must realise, she says, that India lives in contemporary times. It is maybe therefore cinema, which reflects this society that must be pushed out west. I am personally averse to the idea that a western market should judge Bollywood films according to their own paradigm. I believe that in a fast shrinking global village we must try to understand different cultures within their given contexts and not judge developing nations by standards set by the west. To remove the music and cut the length of Bollywood films, although making them more accessible to the South Asian diaspora and western markets, in short, changes the entire Bollywood paradigm. Bollywood culture appears to be a definitive element in helping to definine and shape the identities of the South Asian diaspora whilst additionally acting as an important binding tool for them This is why I believe the crossover films best encompass all the attributes desired by the South Asian diaspora market - they entwine two cultures seamlessly, creating a unique and individual cinema that truly appears to reflect the emerging identity of the South Asian diaspora. Bibliogrpahy Rajinder Dudrah : Vilayati Bollywood: popular Hindi cinema going and diasporic south Asian identity in Birmingham (2002) Jinga Desai : Beyond Bollywood: the cultural politics of the south Asian diasporic film (2004) K Moti Gokulsing & Wimal Dissanayake : Indian Popular Cimema: a marrative of cultural change (1998) Preben Kaarsholm : City Flicks: Indian cinema and the urban experience (2004) Manjunath Pendakur : Indian Popular Cinema: industry, ideology and conciousness (2003) ...read more.