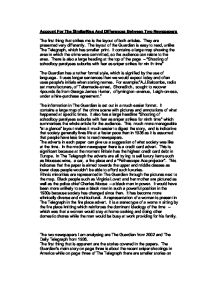 Account For The Similarities And Differences Between Two Newspapers

Account For The Similarities And Differences Between Two Newspapers The first thing that strikes me is the layout of both articles. They are presented very differently. The layout of the Guardian is easy to read, unlike The Telegraph, which has smaller print. It contains a large map showing the area in which the crime was committed, so the audience can relate to the area. There is also a large heading at the top of the page - "Shooting of schoolboy paralyses suburbs with fear as sniper strikes for ninth time" The Guardian has a rather formal style, which is signified by the use of language. It uses longer sentences than we would expect today and often uses people's initials when stating names. For example:"A.J.Balcombe, radio set manufacturers, of Tabernacle-street, Shoreditch, sought to recover 4pounds 5s from George James Hunter, of lymington-avenue, Leigh-on-sea, under a hire-purchase agreement." ...read more.

This is significant because at the moment Britain has the highest credit card debt in Europe. In The Telegraph the adverts are all trying to sell luxury items such as Moussec wine, a car, a fire place and a "Pathescope Ace projector". This indicates that the paper is aimed towards the upper and middle classes as lower class people wouldn't be able to afford such luxuries. Ethnic minorities are represented in The Guardian through the pictures next to the map. Black people such as Virginia Lovett and her mother are pictured as well as the police chief Charles Moose - a black man in power. It would have been more unlikely to see a black man in such a powerful position in the 1930s because society has changed since then. ...read more.

Perhaps the newspaper readers of today demand overseas news and have become more interested in it, another reason for the change are the advances in technology that have been made since 1936. It is now possible to gain information from somewhere in the world and then send it thousands of miles away within a matter of minutes, thanks to technology like the internet, fax machines and mobile phones. In 1936 it would have taken days to get information from far away counties. Further advances in technology can be seen by comparing the pictures of modern cars in The Guardian to the advert for the "Adelphi" car. The article on divorce in The Telegraph highlights the change in society that has occurred. The article talks about the possibility of changing the marriage bill. It would seem unusual to have an article about divorce in today's society as it has become a very common and widespread thing in modern society compared to in 1936. ...read more.