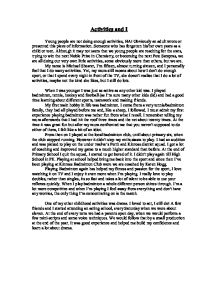 Activities and I Young people are not doing enough activities, HA! Obviously an adult wrote or presented this piece of information. Someone who has forgotten his/her own years as a child or teen. Although it may not seem that we young people are reaching for the stars, trying to win the next Noble Prize in Chemistry, or becoming the next Pete Sampras, we are all doing our very own little activities, some obviously more than others, but we are. My name is Michael Shearer, I'm fifteen, almost turning sixteen, and I personally feel that I do many activities. Yet, my mum still moans about how I don't do enough sport, or that I spend every night in front of the TV, she doesn't realise that I do a lot of activities, maybe not the kind she likes, but I still do lots. When I was younger I was just as active as any other kid was. I played badminton, tennis, hockey and football (as I'm sure many other kids did) and had a good time learning about different sports, teamwork and making friends. My first main hobby in life was badminton. ...read more.

At the end of every term we had a parents open day, when we would perform a few mini-scripts and some voice techniques. We would follow that by a small production at the end of the year. It was good experience and helped me build my confidence and learn a lot about drama. Being part of this drama grouped helped me move on to new things and areas of drama. When I started High School I also started a local musical theatre group called MTKY (Musical Theatre for Kinross Youth). Our first performance was a concert, filled with a variety of showstoppers from a wide range of musicals, including Memory: Cats, Do You Hear the People Sing?: Les Miserables, and I Know Him So Well: Chess. I remember the first song we sang was Greased Lightning, and the feeling as the music started and the curtains drew back was a mixture of nerves and excitement - mainly nerves! The show went down a treat. Since then, MTKY have presented three other musicals :- Calamity Jane, Guys and Dolls and Fame, in all of which I have had principal parts. Fame was our first production; I played Joe Vegas, a Puerto Rican, comedian who lived in the Bronx, down town New York. ...read more.

They were never out of character for a single moment and there movement was outstanding, as was the choreography. They dance so closely together, yet they never touch one another. The set-design was splendid. The whole theatre is a Junkyard. The actors use the whole theatre as their playground. They run, slide, jump, scamper, leap, and crawl all around you. You feel as if your part of the musical. It was fantastic and a "Memory" I will never forget. Although I rate Cats very highly, its my second favourite musical. My favourite musical is Andrew Lloyd Webbers's "The Phantom of the Opera". I find the music tremendous and simply breathtaking. My favourite song from the show is " The Music of the Night", the lyrics are amazing and I get goose bumps every time I hear the song. I have never seen the show, but I have the soundtrack which is the closest to seeing the show I can get. If the CD is that good I just dream of how good the show would be live. "The Phantom of the Opera" inspires me in theatrical ways and musical ways, it inspires me to write my own musical, which one day I hope I will!!! So, who says "Young people are not doing enough activities"? My opinion, HA! Michael Shearer ?? ?? ?? ?? ...read more.