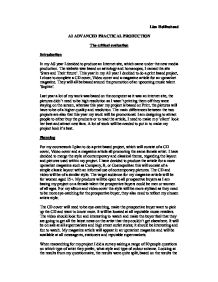 Lisa Hollinshead A2 ADVANCED PRACTICAL PRODUCTION The critical evaluation Introduction In my AS year I decided to produce an Internet site, which came under the new media production. The website was based on astrology and horoscopes, I named the site 'Stars and Their future'. This year in my A2 year I decided to do a print based project, I chose to complete a CD cover, Video cover and a magazine article for an upmarket magazine. They will all be based around the promotion of an upcoming music talent 'Sophie'. Last year a lot of my work was based on the computer as it was an internet site, the pictures didn't need to be high resolution as I wasn't printing them off they were staying on the screen, whereas this year my project is based on Print, the pictures will have to be of a higher quality and resolution. The main differences between the two projects are also that this year my work will be promotional. I am designing to attract people to either buy the products or to read the article, I need to make my 'client' look her best and attract new fans. A lot of work will be needed to put in to make my project look it's best. Planning For my coursework I plan to do a print based project, which will consist of a CD cover, Video cover and a magazine article all promoting the same female artist. ...read more.

Microsoft Photo draw to touch up and edit pictures, I also used this programme to create my video and CD cover. I used the programme Microsoft Publisher to create my magazine article. This influenced the progress of my production by allowing easy transfer of my picture's into my pieces. The programme Photo draw also helped my to edit the pictures and allowed me to get them to the best quality. I decided to work on my own when completing this project as this meant that I could organise my time easily and I could make my own decisions. Analysis I have produced a video cover, CD cover package and a magazine article. All three of my projects share a classic theme to reflect the style of 'Sophie' my chosen artist. My product reflects and uses the conventions of the media genre that I am working in which is the promotion of an up and coming teen music star. Overall I think that finished product reflects the theme and style I set out to. I wanted Sophie to be seen as a classic artist and to not be associated with the pop genre. My CD cover consists of grey tones that reflect a classic theme; within the booklet it contains the lyrics and more pictures of Sophie, each reflecting her individual style. ...read more.

The video cover doesn't include a lot of text, there is a blurb on the back which aims to entice the reader into wanting to watch the video gaining information that they wouldn't be able to get else where i.e. using phrases like 'never before seen footage'. The potential buyers only read this though once they have picked the video up. I included 'quotes' on the front cover from top magazines to show what they think of the video and Sophie, 'HOTTEST NEW TALENT', 'NOT TO BE MISSED!!!' Again enticing the potential buyer to pick up the video. The representation of the video is included on the back of the video cover within the blurb. Words like 'exclusive' and descriptive work describing Sophie 'beautiful', 'superstar' all make the buyer want to know more. I have made use of particular stereotypes within my work, I have gone against them. Typically new uprising music stars are manufactured, blonde, don't have individual style, and are single and available. All of these I have gone against and my star is refreshingly new, red hair, individual style, writes own music/ lyrics, and is in love and is not ashamed to let the world know. Her music comes first not the number of no1's or record sales. A breath of fresh air and individuality makes sales. ...read more.