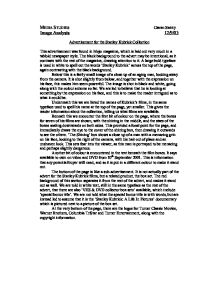 Advertisement for the Stanley Kubrick Collection.

MEDIA STUDIES Ciaran Sainty Image Analysis 12/9/03 Advertisement for the Stanley Kubrick Collection This advertisement was found in Mojo magazine, which is laid out very much in a tabloid newspaper style. The black background to the advert may be intentional, as it contrasts with the rest of the magazine, drawing attention to it. A large bold typeface is used in white to spell out the words 'Stanley Kubrick' across the top of the page, again contrasting with the black background. Below this is a fairly small image of a close up of an aging man, looking away from the camera. It is shot slightly from below, and together with the expression on his face, this makes him seem powerful. ...read more.

This gives the reader information about the collection, telling us what films are available. Beneath this we encounter the first bit of colour on the page, where the boxes for seven of his films are shown, with the shining in the middle, and the sizes of the boxes scaling downwards on both sides. This provided a focal point for the page, and immediately draws the eye to the cover of the shining box, then drawing it outwards to see the others. 'The Shining' box shows a close up of a man with a menacing grin on his face, looking to the right of the camera, with his hair out of place and an unshaven look. ...read more.

It is not actually part of the advert for the Stanley Kubrick films, but a related product, the box set. The red background of this section separates it from the rest of the advert, and makes it stand out as well. We are told in white text, still in the same typeface as the rest of the advert, that there are also 'VHS & DVD collector box sets' available, which include 'special bonus title'. We are not told what the special bonus title is with words, but are instead led to assume that it is the 'Stanley Kubrick: A Life In Pictures' documentary which is pictured next to a picture of the box set. At the very bottom of the page, there are the logos for Turner Classic Movies, Warner Brothers, Columbia TriStar and Turner Entertainment, along with the copyright information. ...read more.