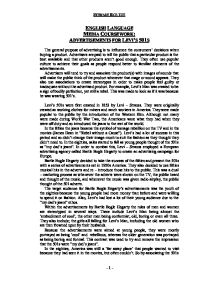 ENGLISH LANGUAGE MEDIA COURSEWORK: ADVERTISEMENTS FOR LEVI'S 501S The general purpose of advertising is to influence the consumers' decisions when buying a product. Advertisers are paid to tell the public that a particular product is the best available and that other products aren't good enough. They often use popular culture to achieve their goals as people respond better to familiar elements of the advertisements. Advertisers will tend to try and associate the product(s) with images of sounds that will make the public think of the product whenever that mage or sound appears. They also use associations to create stereotypes in order to make people feel guilty or inadequate without the advertised product. For example, Levi's Man was created to be a sign of bodily perfection, yet still a rebel. This was made to look as if it was because he was wearing 501's. Levi's 501s were first created in 1853 by Levi - Strauss. They were originally created as working clothes for miners and ranch workers in America. They were made popular to the public by the introduction of the Western film. ...read more.

For each advertisement the music actually related to what was happening within the advertisement as well as the message at the end. For example; in 'Launderette', the music is Marvin Gaye's "I Heard It Through The Grapevine." which signifies that the actions of Levi's Man (played in this advertisement by Nick Kamen) would have been talked about a lot. The reason that music was used instead of dialogue was because of the dual marketing campaign to re - release the vintage musical hits at the same time. Levi's try to create a "want to buy" ethos by using images of Levi's Man's intense pleasure at wearing the 501s to show how pleasurable the 501 can be. They also show the 501s being used in unusual and 'wacky' ways to show that a pair of jeans can be more than just boring clothes. CLOSE ANALYSIS: - LAUNDERETTE A 50's Cadillac drives passed a launderette in a 'typical' American street. There is a man in US Army uniform standing by the door. Nick Kamen arrives and walks in. Nick Kamen enters the launderette and takes off his sunglasses. ...read more.

The launderette scene then fades, to be replaced by the image of a pair of 501's sporting the caption "NOW AVAILABLE STONEWASHED" in the following format: The shared images all seem to denote parts of the desirable stereotype of Levi's Man. For example, the steam from the washing machines adds to the shared image of heat in the advertisements and is there to contrast from the 'cool' image of Levi's Man. The tanned body shows that Levi's Man is fit and is likely to get the girl. It also contrasts the old, conformist, and conventional people in the advertisements. Other contrasts are the white boxers being plain and boring, contrast the 501's which are denoted and being fun and 'colourful' in comparison. After the first year of the campaign, sales of 501's were up by 800% compared with the year before. The sales of white boxer shorts rose by a similar amount at the same time, due to the fact of Levi's Man nearly always wearing white boxer shorts. The sales of other items featured in the advertisements, BryllCream or sunglasses for example also rose. From this information, I think that the advertising campaign was a success for Bartle Bogle Hegarty and for Levi's. STEWART RICE 11H - 1 - ...read more.