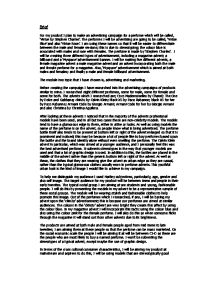 Brief For my product I plan to make an advertising campaign for a perfume which will be called, 'Virtue by Stephen Charles'. The perfumes I will be advertising are going to be called, 'Virtue Blue' and also 'Virtue Rose'. I am using these names so that it will be easier to differentiate between the male and female versions; this is due to stereotyping; the colour blue is associated with males and rose with females. The perfume is made by 'Stephen Charles'. I will be creating three different types of advertisement, including a magazine advert; a billboard and a 'Myspace' advertisement banner. I will be making five different adverts, a female magazine advert a male magazine advert and an advert incorporating both the male and female perfume for a magazine. Also, 'Myspace' advertisement which is aimed at both males and females; and finally a male and female billboard advertisement. The module two topic that I have chosen is, advertising and marketing. Before creating the campaign I have researched into the advertising campaigns of products similar to mine. ...read more.

This youthful urban look is the kind of image I would like to achieve in my campaign. To help me distinguish my audience I used Hartley subjectives, particularly, age, gender and also self image. The target audience for my product will be between teens and people in their early twenties. The typical social group I am aiming at are students and young, fashionable people. I will do this by presenting the models in my advert to be a representative sample of these social groups. The models will be wearing stylish and fashionable clothes to help promote this image. Out of the perfumes which I researched, if any, I will be basing my advert upon the 'ckin2u' advertisement; this is because our perfumes are aimed at similar audiences. The colours in the 'ckin2u' advert are very bright they create this affect by using the colour blue. In my magazine advert I will incorporate this tactic using the colour blue and also using the colour pink for the female perfume. ...read more.

Due to this brand identity, I will be using publications such as, 'FHM', 'nuts', 'zoo', 'heat', 'more' and 'cosmopolitan' to advertise my perfume as my preferred audience are the same as these so therefore the readers will not be offended as they are not the negotiated audience. For the billboard and 'myspace' advert, I will be using an advert for both the male and female perfumes incorporated into one. This is because when trying to attract an audience where you cannot control who sees the advertisement there will be male and female people looking at it; so if only one gender was advertised, it wouldn't appeal as much as if there was both male and female perfumes' being advertised. This advert also has the added appeal of couples and connotations of love, which again is a popular ideology amongst a young audience. To make my advertisements I will be using the photo editing software, Photoshop. I will be using this as it is the most professional way of creating and manipulating photos and also because I have access to this at both; home and at college. Although, having no experience of using this software could be a potential difficulty. ...read more.