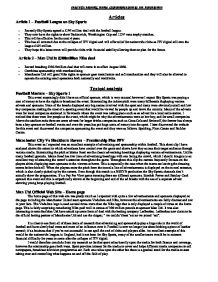 Advertising and sponsorship in football.

Advertising and Sponsorship in football Articles Article 1 - Football League on Sky Sports - Recently Sky Sports agreed a �195 million deal with the football league. - They now have the rights to show Nationwide, Worthington Cup and LDV vans trophy matches. - This will be effective for the next 4 years. - This has all occurred due to the collapse of ITV digital and will offer relief for nationwide clubs as ITV digital still owe the league �185 million. - They hope this latest move will provide clubs with financial stability allowing them to plan for the future. Article 2 - Man Utd in �300million Nike deal - Record breaking �302.9million deal that will come in to effect August 2002. - Combines sponsorship with merchandising. - Manchester Utd will grant Nike rights to sponsor gear manufacture and sell merchandise and they will also be allowed to operate the existing retail operations both nationally and worldwide. Textual analysis Football Masters - Sky Sports 1 This event surprisingly didn't have an official sponsor, which is very unusual however I expect Sky Sports was paying a sum of money to have the rights to broadcast the event. ...read more.

Spalding, Plum Centre and Builder Centre. Manchester City Vs Blackburn Rovers - Premiership Plus PPV This event as I expected was an excellent example of advertising and sponsorship within football. This short clip I have analysed shows the extent to which advertisers have control over the game and shows how they access their target audience through various media. Surrounding the pitch at Maine Road are the classic advertising hoardings displaying various advertisements. Unlike many football grounds. Maine Road has two lines of advertising hoardings with one facing the crowd, which I should imagine is an excellent way of attracting the crowd's attention throughout the game. Throughout this clip the camera frequently focuses on the players shirts displaying team sponsors to the viewers at home. This is especially the case when the teams are leaving the dressing rooms before kick off. When the players enter the pitch from the tunnel a line of advertisements is displayed on the tunnel entrance, which is also clearly picked up by the camera. ...read more.

It is clear to see from all of these items of research that advertising and sponsorship play a huge role in the world of football and have slowly had more and more of an influence over it. Football is now no longer just about kicking a piece of leather around; it's a business that if you're not successful in can spell the end of clubs and players alike. An excellent example of this would be the nationwide leagues in England, had it not been for Sky Sports, many of the smaller teams would be in extreme financial difficulty for years to come after the collapse of ITV digital. I would therefore conclude from my research so far that sport relies heavily upon the media for both finance and coverage, however the relationship goes both ways. Sport provides interest for the media to cover and helps different media companies to sell newspapers, broadcast television programmes etc. Each one relies upon the other but there is a gradual trend for the media to start taking over and controlling what happens on and off the field of play. ...read more.