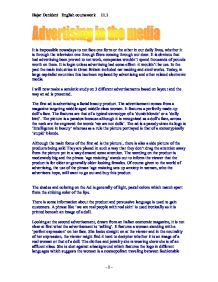 Advertising in the media.

It is impossible nowadays to not face one form or the other in our daily lives, whether it is through the television one through fliers coming through our door. It is obvious that had advertising been proved to not work, companies wouldn't spend thousands of pounds worth on them. It is logic unless advertising had some effect- it wouldn't be use. In the past the main industries in Great Britain included car making and steel works. Today, in large capitalist countries this has been replaced by advertising and other related electronic media. I will now make a semiotic study on 3 different advertisements based on layout and the way an ad is presented. The first ad is advertising a facial beauty product. The advertisement comes from a magazine targeting middle aged middle class women. It features a perfectly made-up doll's face. The features are that of a typical stereotype of a 'dumb blonde' or a 'dolly bird'. The picture is a paradox because although it is recognized as a doll's face, across the neck are the engraved the words 'we are not dolls'. ...read more.

A phrase like 'we are real people with real skin' is used ironically as it is printed beneath an image of a doll. Looking at the second advertisement, drawn from an Italian economic magazine, it is not clear at first what the advertisement is 'selling'. It features a woman standing with a 'perfect expression' on her face. She looks straight on at the viewer and in the neutrality of her expression, the viewer might find it hard to decipher whether it is an image of a real woman or that of a doll. The clothes and jewelry she is wearing show she is of an affluent class. She is shot against a background which features the logo in different languages which suggests the woman is a cosmopolitan traveling between fashionable European cities. The ad is mainly printed, for the moment, in the world language English and the logo is placed in the centre of the ad. The colors used in the ad are complementary and there is no apparent display of color which 'shocks' the viewer except for the bright red lipsticked lips which by contrast draw the casual magazine page turner's attention. ...read more.

The ad is in a way selling the lifestyle of the woman, she is active, has a perfect body as well as being to standards, attractive. She rules out the idea that sportswoman are unattractive. This advertisement has been created to appeal to both woman and men. It appeals to the woman as it gives them a role model. The ad appeals to men as the model is quite pretty and has an attractive body. The advertisement is targeted at woman of all ages. This differs to the first ad which was mainly targeted at middle aged woman and which also differs to the second advertisement which appeals to women from the affluent classes. It is fair to conclude that although advertising companies seek more customers in general, their advertisements are targeted at particular groups rather than at the undifferentiated public which shows that we, as potential customers, have been studied quite intently, so much so that advertising companies know what will and won't persuade us to buy a product. ?? ?? ?? ?? Hajar Denideni English coursework 11.1 - 1 - ...read more.