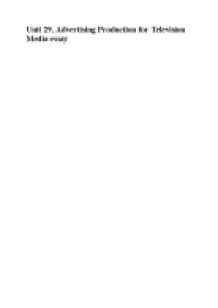 ﻿Unit 29, Advertising Production for Television Media essay ________________ Unit 29, Advertising Production for Television Advertisement is part of everyday life. Television Advertisement is one of the most important forms of advertisement. TV reaches a much larger audience than a newspapers or radio stations, and it does so during a short period of time. It reaches viewers when they're the most focused (eg: when watching favourite television programme, soup or sport broadcast.). It allows carrying a message with sight, sound, and motion, which can give the product, or service look more appealing. It gives you an opportunity to be creative and attach a personality to your business, which can be particularly effective for businesses that rely on repeat customers. Advertising on television allows you to show and tell a wide audience your business, product, or service. It allows you to actually demonstrate the benefits it. You can show how your product or service works and how it's packaged so it influences the target audience in to buying a product or service. Now a days we have huge choice of channels so there is a demand delivering the best all the time, and also the price for the placing adverts at certain times are now getting very expensive for example during the super bowl 2008 (American football championship final) ...read more.

When advert makers are looking to get an emotional response out of the audience when they watch this advert and or want to a donation from the audience. For example: - adverts that want donation to kids that live in poorer countries ask all a rhetorical question wail showing an shocking images, this is to get as much sympathy as possible from the viewers and also to for the video to stick in the viewer?s minds. But the main aim is to make them donate money, so the video need to create as big emotional response as possible. There are adverts that are aimed to scare people into stop doing wrong. There are often created with a lot of shocking video and images in an image to scare viewers that are watching. Eg: speeding adverts an aimed to shock and scare viewers in order stop them from speeding in places they shouldn?t. An example of an advert is the think advert. They shows the inside of a man organs crush after the car stops. The aim is to put fear in the viewers and also to make them stop speeding and driving carelessly. Those adverts will be targeted people drive; they will be aired during the evening because of the graphic scenes that are in the video. ...read more.

the adverts did not incite racial discrimination but acknowledged that a significant minority of viewers had been unintentionally offended so the advert was banned. An example of an advert being banned for misleading its viewers is the advert for Aviva bank. The advert, starring Paul Whitehouse, features a voiceover saying: "when you retire get up to 20% more income with Aviva". However four people thought that the advert was misleading and complained about the advert. Aviva claims its annuity rates are 20% or more above those of its competitors in 22% of cases. The insurer also says the inclusion of the words ?up to 20%' in the advert makes it clear not all of its annuities will be 20% above those of competitors. However, the ASA decided that compared with other open-market providers, Aviva were only able to offer 20% more income in only a small number of cases. The advert was banned by the ASA for making false claims and misleading viewers. In conclusion the advertisement industry has gone a long way since first airing in 1955 and there no doubt that it is going to advance in the years to come but to make an advert you all ways need to look at the structure, technique and most importantly the audience. Or the advert will not have its full impact. ...read more.