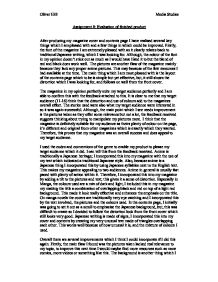 Assignment 8: Evaluation of finished product After producing my magazine cover and contents page I have realised several key things which I am pleased with and a few things in which could be improved. Firstly, the font of the magazine I am extremely pleased with as it clearly relates back to traditional Japanese writing, which I was looking for. Although, the colour of the font in my opinion doesn't stick out as much as I would have liked it to but the blend of red and black does work well. The pictures are another flaw of the magazine mainly because they lack any proper anime pictures. This may because of the few resources I had available at the time. The main thing which I am most pleased with is the layout of the contents page which to be is simple but yet effective, but, it still shows the distortion which I was looking for, and follows on well from the front cover. ...read more.

I can tell this from the feedback received. Anime is traditionally a Japanese heritage; I incorporated this into my magazine with the use of my text which indicated a traditional Japanese style. Also, because anime is a Japanese thing I incorporated this by using Japanese syllables next to the English text. This makes my magazine appealing to two audiences. Anime in general is usually fast paced with plenty of action within it. Therefore, I incorporated this into my magazine by adding a tilt to the pictures and text; this gives it a sense of distortion. Especially in Manga, the colours used are a mix of dark and light, I included this in my magazine my making the title a combination of overlapping black and red on top of a light red background. This made it look really effective and enhances the emphasis on the title. On manga novels the covers are traditionally very eye catching and I incorporated this by the text involved, the pictures and the colours used. ...read more.

Because of the pictures, I had to mould by stories around what I took pictures of. This proved a problem but I think I managed to do this so they relate to my pictures. The contents page layout is another thing which I think needs improving, although the simplistic approach does look good, it doesn't really have the fast paced look I wanted to achieve, maybe next time I could incorporate some pictures into the contents page so that it breaks up the list of text. Using the Japanese syllables on the front cover does other me two markets for my magazine. But it does make the cover look a bit cluttered, and therefore, next time I might use less of them or none of them at all. Overall, I am pleased with how my magazine has turned out, in my opinion it offers what my target audience what and also like to see. There are a few improvements which could be made, but in general I am pleased with both the cover and the contents page, especially the cover. ?? ?? ?? ?? Oliver Hill Media Studies ...read more.