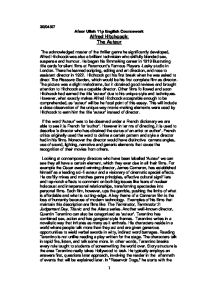 30/04/07 Afsor Ullah 11p English Coursework Alfred Hitchcock: The Auteur The acknowledged master of the thriller genre he significantly developed, Alfred Hitchcock was also a brilliant technician who skilfully blended sex, suspense and humour. He began his filmmaking career in 1919 illustrating title cards for silent films at Paramount's Famous Players-Lasky studio in London. There he learned scripting, editing and art direction, and rose to assistant director in 1922. Hitchcock got his first break when he was asked to direct The Pleasure Garden, which would be his first complete film as director. The picture was a slight melodrama, but it obtained good reviews and brought attention to Hitchcock as a capable director. Other films followed and soon Hitchcock had earned the title 'auteur' due to his unique style and techniques. However, what exactly makes Alfred Hitchcock acceptable enough to be comprehended, as 'auteur' will be he focal point of this essay. This will include a close observation of the unique way movie-making elements were used by Hitchcock to earn him the title 'auteur' instead of director. If the word 'Auteur' was to be observed under a French dictionary we are able to see it is French for 'author'. However in terms of directing, it is used to describe 'a director who has obtained the status of an artist or author'. ...read more.

Other examples such as 'Notorious' another U.S hit, during the scene where the two main heroes of the film are walking down the staircase to reach the front door whilst the gangsters stand in the doorway. A tilt-down shot is taken and we, the audience, are looking down towards the gangsters, who stand still. By choosing this camera angle the scene becomes more sinister and the audience will feel a sense of discomfort to the proceeding scene. As well as using diegetic (sound effects) and non-diegetic sound (voice over background music), Hitchcock uses parallel sound (background music) to add ambience to the scene. Hitchcock toggles with this device in his thriller films to create the scene to be scarier than it is. Without parallel and diegetic sound a movie would fail to scare the audience. The opening sequence films such as 'Rear window can verify this statement whereby calm music is used to add a calm atmosphere whereas in 'Psycho' during the shower sequence, sharp music is used to add horror and violence to the scene. And as for his use of diegetic sound, in 'Rear Window' he used the chirping of birds and a hint of cars to add a fairly stereotypical atmosphere but in 'Psycho' Hitchcock stabbed a watermelon to simulate the sound of a victim being stabbed. ...read more.

However, he can also fool the viewer with lighting by showing a murder in a well-lit place as he did in 'Psycho' during the shower sequence where the light is fully on. Hitchcock did not achieve the status 'auteur' because he used the elements that have been conversed in this essay. It was the incomparable way he used it. The way he masterfully employed various techniques in order to create tension, suspense, and unease in each shot. His planning of every detail in advance with the help of storyboards, pictorial outlines, depicting specific scenes or shots created the films he directed to be inimitable by any contemporary director. In all of his great works, Hitchcock manages to manipulate the emotions on the screen and within his viewers. Hitchcock took the thriller genre to the next stage and thus inspired successors such as John carpenter who made the 'Halloween' series and totally changed the way movies are now produced. So I end by saying that Hitchcock's films are easily recognizable, not only because of his numerous cameo appearances, because of the Hitchcock style, which was a result of his complete control over the picture. By encompassing this marvellous control, Hitchcock has earned the right to obtain the title 'auteur' and his legacy will live on for future generations to explore. 1 ...read more.