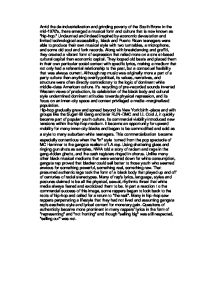 Amid the de-industrialization and grinding poverty of the South Bronx in the mid-1970's, there emerged a musical form and culture that is now known as &quot;hip-hop.&quot;

Amid the de-industrialization and grinding poverty of the South Bronx in the mid-1970's, there emerged a musical form and culture that is now known as "hip-hop." Undaunted and indeed inspired by economic devastation and limited technological accessibility, black and Puerto Rican teenagers were able to produce their own musical style with two turntables, a microphone, and some old soul and funk records. Along with breakdancing and graffiti, they created a vibrant form of expression that relied more on a street-based cultural capital than economic capital. They looped old beats and placed them in their own particular social context with specific lyrics, making a medium that not only had a referential relationship to the past, but a contextual flexibility that was always current. Although rap music was originally more a part of a party culture than anything overtly political, its values, narratives, and structure were often directly contradictory to the logic of dominant white middle-class American culture. It's recycling of pre-recorded sounds inverted Western views of production, its celebration of the black body and cultural style undermined dominant attitudes towards physical repression, and its focus on an inner-city space and context privileged a media-marginalized population. Hip-hop gradually grew and spread beyond its New York birth-place and with groups like the SugarHill Gang and later RUN-DMC and LL Cool J, it quickly became part of popular youth culture. Its commercial viability introduced new tensions within the hip-hop medium. ...read more.

Hence, it is critical that we make efforts to understand the relationships between hip-hop's form and its appropriation. This is even more crucial when we consider that the tensions and changes in these appropriation dynamics speak to more than personal perceptions, but also to larger social and cultural relations. Stuart Hall addressed this issue when he wrote: What we are talking about is the struggle over cultural hegemony, which is these days waged as much in popular culture as anywhere else... Cultural hegemony is never about pure victory or pure domination (that's not what the term means); it is never a zero-sum cultural game; it is always about shifting the balance of power in the relations of culture; it is always about changing the dispositions and the configurations of cultural power (Hall, 1992: 468) Hall argues that these power struggles are neither revolutionary nor necessarily unchanged, but that we should look at both areas of difference and sameness in these "wars of position" (Hall, 1992: 468). I intend to do just this in my exploration of hip-hop's various appropriations. I have studied two very different hip-hop groups: rap fans in Nairobi, Kenya and members of the Internet newsgroups alt.rap and rec.music.hip-hop. I believe these very different communities and their interpretations and appropriations of hip-hop can speak to the power of the images and ideologies of authenticity within rap music. Equally important, these communities can also give clues to the dynamic forces that shape relationships to mediated cultural forms. ...read more.

Although I could never hope to map all of the forces behind these complex and multi-faceted appropriation dynamics, I can offer a sketch at the various ways hip-hop is viewed and used by Nairobi youth and Internet newsgroup members. My mom used to always tell me that she loved oak trees because depending on where you are standing or how you are moving, a single tree can have many appearances. The way the branches bend and twist up and around each other makes for a matrix of dark lines and angles that constantly move in relation to each other as you circle around its trunk or pass by in a car. I believe hip-hop is similarly changing, for although every individual may say that he or she knows that tree, there is no definitive description of its structure. The most we can do is detail where we are coming from and what we are looking at. What is more, if we were to view the oak in commodity terms, through either the eyes of a furniture maker or an environmentalist, we can see how the tree's meaning can be a highly contentious struggle over purpose and power that depends on these perspectives of how one views what and why. Hip-hop is equally problematic and dynamic as it constantly grows and takes on more meanings. I can only begin to describe hip-hop's roots, branches, symbols and signification, but I hope the analysis I do make will provide some grounds for new perspectives in these ever-changing relationships. ...read more.