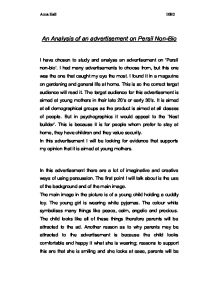 An Analysis of an advertisement on Persil Non-Bio.

An Analysis of an advertisement on Persil Non-Bio I have chosen to study and analyse an advertisement on 'Persil non-bio'. I had many advertisements to choose from, but this one was the one that caught my eye the most. I found it in a magazine on gardening and general life at home. This is so the correct target audience will read it. The target audience for this advertisement is aimed at young mothers in their late 20's or early 30's. It is aimed at all demographical groups as the product is aimed at all classes of people. But in psychographics it would appeal to the 'Nest builder'. This is because it is for people whom prefer to stay at home, they have children and they value security. In this advertisement I will be looking for evidence that supports my opinion that it is aimed at young mothers. In this advertisement there are a lot of imaginative and creative ways of using persuasion. The first point I will talk about is the use of the background and of the main image. ...read more.

For these reasons it would be more appealing to parents of young children, this is because parents of young children are young themselves. At the very bottom of the advertisement there is a badge, which shows that it is safe to skin. It says 'dermatologically tested' on it. This reassures the customer that it is save to skin and that it will not cause any skin conditions. Next to this badge there is a slogan that says 'Because it matters'. This slogan is also reassuring to the customers, as they will think the company, Persil, care about peoples allergies to washing powder. Also alongside the badge and the slogan there is a picture of the product; this is an important aspect to an advertisement as it increases the brand awareness and therefore customers will know what to look for in a supermarket. The advertisement consists of two sections of writing, the first is much more eye-catching than the second as it uses much larger font size and has emboldened certain words in the text. ...read more.