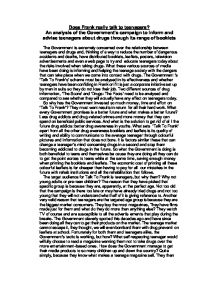 Does Frank really talk to teenagers? An analysis of the Government's campaign to inform and advise teenagers about drugs through its range of booklets The Government is extremely concerned over the relationship between teenagers and drugs and, thinking of a way to reduce the number of dangerous accidents and deaths, have distributed booklets, leaflets, posters, television advertisements and even a web page to try and educate teenagers today about the risks involved when taking drugs. What these various sources of media have been doing is informing and helping the teenage society with the dangers that can take place when we come into contact with drugs. The Government's 'Talk To Frank's' scheme must be analysed in its effectiveness and whether teenagers have been confiding in Frank or if it is just a corporate initiative set up by men in suits so they do not lose their job. Two different sources of drug information, 'The Score' and 'Drugs: The Facts' need to be analysed and compared to see whether they will actually have any effect on teenagers today. So why has the Government invested so much money, time and effort on 'Talk To Frank'? They must want results in return for all their hard work. What every Government promises is a better future and what makes a better future? Less drug addicts and drug-related crimes and more money that they can spend on beneficial public services. And what is the solution to get rid of all the future drug addicts: better drug awareness in youths. ...read more.

So again, this connotes that there might be confusion about drugs and that this magazine is going to give you all the answers. The main title tells you from the beginning exactly what this booklet is going to be talking about. Exactly in the vein of 'The Score', the booklet has used generic features from teenage magazines to draw teenagers in and to get them to read this booklet. One of the tasters that is on the front cover of 'Drugs: The Facts' says 'Problem Page'. A problem page is one of the main generic features of a teenage magazine; the fact that they are even considering the main generic features of a teenage magazine is showing how much they want them to read their booklet. They have used teenage slang to suggest that their booklet is laid back and relaxed, almost as if they have copied all the elements that made 'The Score' such a success. On the central layout of the front cover, there is an open eye. This could connote that this booklet is going to open you eyes to the problems regarding drugs and how to avoid them. Because their marketing campaign is so similar to 'The Score', it still is able to catch a teenager's eye but at the same time comes across somewhat younger, to appeal more to the pre-teen market. Not all teenagers will be drawn in by the style that has been used, such as pictures resembling cartoons and slanting words, and this could cost 'Drugs: The Facts' when it comes to desirability. ...read more.

All the Government would need to do is to combine some of the contents that are in 'Drugs: The Facts' such as the questionnaire that tells you what kind of person you are, and the various other quizzes with the method of presenting their information on drugs with the front cover of 'The Score' and they would have a far better booklet. Both booklets seem to miss the mark with what a teenager is looking for in a magazine. However, and this is generally the same with most other magazines similar to them, both manage to show the pressure that teenagers are under and all the possible factors that makes it worse. It clearly and repeatedly says that drugs are not a means of escape from all of this and at the ends of both booklets is the Talk To Frank help line which, and I quote, "offers free and confidential advice about any drugs issue, whether it's info you're after, advice or just a chat. You can also find out about the services available in your area. Lines are open 24 hours a day." I wondered whether what it was stating was actually true, that they offer friendly advice. I talked to a friend who had phoned up the Talk To Frank help line a few months ago to try and find some answers. He told me that they offered advice, even to the questions that every parent dreads to hear. Does Frank really talk to Teenagers? Yes, and their help line is 0800 77 66 00. ...read more.