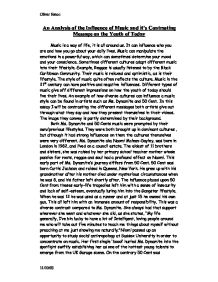 An Analysis of the Influence of Music and it's Contrasting Message on the Youth of Today.

An Analysis of the Influence of Music and it's Contrasting Message on the Youth of Today Music is a way of life, it is all around us. It can influence who you are and how you go about your daily lives. Music can manipulate the emotions in a powerful way, which can sometimes determine your mood and your conscience. Sometimes different cultures adapt different music into their lifestyle. Example, Reggae is usually listened to by the Black Caribbean Community. Their music is relaxed and optimistic, as is their lifestyle. The style of music quite often reflects the culture. Music in the 21st century can have positive and negative influences. Different types of music give off different impressions on how the youth of today should live their lives. An example of how diverse cultures can influence a music style can be found in artists such as Ms. Dynamite and 50 Cent. In this essay I will be contrasting the different messages both artists give out through what they say and how they present themselves in their videos. The image they convey is partly determined by their background. Both Ms. Dynamite and 50 Cents music were prompted by their own/previous lifestyles. They were both brought up in dominant cultures, but although it had strong influences on them the cultures themselves were very different. ...read more.

50 cent soared to popularity with the first single from his new album 'In Da Club.' Ms Dynamite and 50 Cent both introduce past experiences and elements of their cultures into their songs. The songs that most strongly illustrate these elements are Ms Dynamites 'It takes more' and 50 cents 'P.I.M.P'.The titles set the foundation of the songs, and have to be well thought out to interest and catch the attention of the audience.The song 'It takes more' generally promotes an opposing view of the gangster lifestyle, unlike 50 Cent, who promotes it in 'P.I.M.P'.Even though both songs have similar themes the artists themselves express the message in very much different ways. The first twenty to thirty seconds of a video can determine what the remainder is about, and how it impacts the audience. In 'It takes more'Ms Dynamite starts her video with a strong contrast. As she steps out of the trailer there is a background of a divine scenic beach, but as she carries on walking reality begins to kick in and the beach is replaced with strippers and run down sets.Ms Dynamite is wearing casual clothing portray the message of not flaunting yourself. This makes a statement that you don't need to be made up to feel good or be happy with yourself. ...read more.

The camera angles used in both videos accentuate the ways each person wants to be perceived. Ms. Dynamite focuses the camera level with her face to portray the message of equality. In opposition to this 50 Cent uses camera angles from his feet looking upwards. This gives the message that he's bigger than everyone else, God like and worthy of adoration. The way both artists present themselves in their videos gives us an insight into the kind of message they are trying to communicate. The messages and implications of the artist's videos and lyrics are influenced by their similar early life experiences. Whereas Ms. Dynamite presents the reality of the lifestyle, 50 Cent exaggerates and embellishes it into something quite out of the ordinary. The impact both artists have on the audience differs. Ms. Dynamite promotes a social conscience and 50 Cent promotes his underground street culture, by romanticising the gangster image. He relies on people's fascination with violence and the criminal element. In conclusion my essay shows how easily influenced the youth of today can be, through the medium of music. The messages are quite often designed to be relevant to them whether their content is good or bad. I understand that music is important and we all need it as part of our lives, but we need to realise there are many other ways to be motivated and challenged concerning life issues. Oliver Eaton 11/10/03 ...read more.