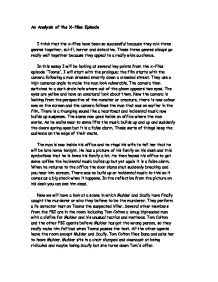 An Analysis of the X-files Episode.

An Analysis of the X-files Episode I think that the x-files have been so successful because they mix three genres together, sci-fi, horror and detective. These three genres always go really well together because they appeal to a really wide audience. In this essay I will be looking at several key points from the x-files episode 'Tooms'. I will start with the prologue; the film starts with the camera following a man dressed smartly down a crowded street. They use a high cameras angle to make the man look vulnerable. The camera then switches to a dark drain hole where out of the gloom appears two eyes. ...read more.

He has a picture of his family on his desk and this symbolises that he is loves his family a lot. He then leaves his office to get some coffee the incidental music builds up but yet again it is a false alarm. When he returns to the office the door slams shut suddenly breaking and you hear him scream. There was no build up or incidental music to this so it comes as a big shock when it happens. In the reflection from the picture on his desk you can see him dead. Now we will have a look at a scene in which Mulder and Scully have finally caught the murderer or who they believe to be the murderer. ...read more.

Mulder is staking out the ruined house where Toom's lair is. Meanwhile Tooms is infiltrating Scully's house. Mulder realises something is wrong when no one leaves the house so he goes to Tooms lair and see all the trophies that he takes from victims before he kills them and he finds Scully's necklace. Realising that Tooms is going to kill Scully, Mulder races to her house and bursts in just as she is being attacked. They overpower Tooms in the end. The film ends with Toom's behind bars and you see him starting to make a new lair. Also he can fit through the gap where the food is passed through Altogether this is a very thrilling episode of the X-files. The suspense never drops and there are some shocking moments. A very enjoyable episode, which uses every trick in the book. ...read more.