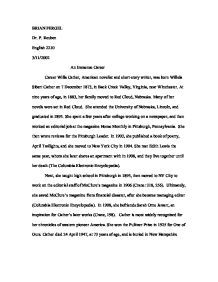 BRIAN FERGEL Dr. P. Reuben English 2210 3/11/2002 An Immense Career Career Willa Cather, American novelist and short-story writer, was born Willela Sibert Cather on 7 December 1873, in Back Creek Valley, Virginia, near Winchester. At nine years of age, in 1883, her family moved to Red Cloud, Nebraska. Many of her novels were set in Red Cloud. She attended the University of Nebraska, Lincoln, and graduated in 1895. She spent a few years after college working on a newspaper, and then worked an editorial job at the magazine Home Monthly in Pittsburgh, Pennsylvania. She then wrote reviews for the Pittsburgh Leader. In 1903, she published a book of poetry, April Twilights, and she moved to New York City in 1904. She met Edith Lewis the same year, whom she later shares an apartment with in 1908, and they live together until her death (The Columbia Electronic Encyclopedia). Next, she taught high school in Pittsburgh in 1895, then moved to NY City to work on the editorial staff of McClure's magazine in 1906 (Crane: 218, 256). Ultimately, she saved McClure's magazine from financial disaster, after she became managing editor (Columbia Electronic Encyclopedia). In 1908, she befriends Sarah Orne Jewett, an inspiration for Cather's later works (Crane, 198). Cather is most widely recognized for her chronicles of western pioneer America. She won the Pulitzer Prize in 1925 for One of Ours. ...read more.

Basically, that modernism regards the "loss of ground" as, ultimately, beneficial, that being holds an utmost meaning, that transformation is indeed necessary. This outlook opposes postmodernism, forasmuch as "postmodernism experiences the loss of ground as a release of tyranny of any and all forms of ultimate meaning and thus denies the claim that being has any ultimate ground." Moreover, Frank H.W. Edler comments on Cather's grace: "The deceptive simplicity of Cather's language makes it an easy read and thus makes it all too easy to miss the language because it is so well crafted" (Edler). Cather seems quite the flip side - the female version, rather - of Oscar Wilde. Aside from the homosexuality issue in both cases, they both have many renowned literary comparisons of the same ideal. Notably, by nearly every biography written of either of them, the articulate sentences that they became able to develop almost spontaneously constitutes a shared signature attribute. Moreover, the insistence that all humans should expose individuality intensifies the prose of both Authors (Reclaiming History). The irony of this comparative outlook, however, resides in the fact that Cather condemned Oscar Wilde in her book column published in the Lincoln, Nebraska Journal, in 1895. Cather was also known to avoid the press to a notable degree, even after her death. In fact, a complete bibliography was not produced concerning her life until over three decades after her death. ...read more.

Cather was also known to avoid the press to a notable degree, even after her death. In fact, a complete bibliography was not produced concerning her life until over three decades after her death. She had a reputation for, according to Frederick B. Adams, being very stern, very precise with her grammar and prose, so naturally she wouldn't want another person to write a bibliography on her life. Ultimately, she controlled the media (Adams, foreword). According to JoAnna Lathrop, two reasons for this three-decade span, which no bibliography was produced, is due to her lengthy and extensive career. Her literary career lasted nearly fifty years, and the wide range of her literary impact covers a broad spectrum of literary careers. In the beginning, she worked as a writer under altered pen names. Then she worked as a newspaperwoman: a columnist, a drama and music critic, a book reviewer, and a reporter. And she was also a feature writer for magazines: an editor, a writer, a poet, a short-story writer, essayist, and a novelist. So no writer dared to embark on that broad range of jobs over such a seemingly drawn-out crusade. Furthermore, I dare not go into listing a complete history of her published writing either, for another writer has already written an entire book of well over a hundred pages, all devoted to listing Willa Cather's published works: Willa Cather: A Checklist of Her Published Writing, by JoAnna Lathrop (1975). ...read more.